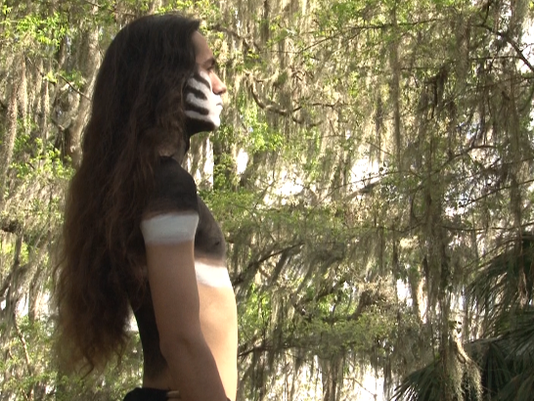 The Timucuan Indians walked in Florida long before Europeans claimed it for their kings.

"They were a sophisticated people," Archaeologist Dana Ste. Claire said.

According to historians, the Timucua lived in Southern Georgia all the way to central Florida, and from the Aucilla River near Tallahassee over to the Atlantic Ocean.

Dr. Gifford Waters is the Collection Manager for the Spanish Colonial Archaeology Department the Florida Museum of Natural History at the University of Florida. He explained that there were an estimated "100,000 to 200,000 or more Timucua" in the southeastern U.S. area when the Spanish arrived in the 16th century.

However, this sophisticated group vanished. So what we now know of the Timucua comes from European documents and from archaeological finds.

Many artifacts are stored in museums and at a collection building at the University of Florida.

Historians say the Timucua lived in circular homes made of thatch and and in organized communities. It was not unusual for the chief to be a woman. And on top of that, "The Timucuan were a matrilineal society, meaning the descent was traced through one's mother," Waters explained.

The Timucua decorated themselves with paint and tattoos, according to historical documents. And even though some European drawings show Timucua tattooed from head to toe, Waters said we don't know if the designs are accurate.

"Depictions of what these tattoos might have looked like may have been influenced by those travelers' earlier expeditions to South America," he noted.

So we're not sure exactly what the paint and tattoo designs really were.

Historians and archaeologists also know the Timucua men would sometimes grow their finger nails really long and sharpen them to a point, possibly in times of warfare. The women would take Spanish moss, de-bug it, and make Spanish moss skirts. Also, archaeologists say the Timucua were not really "giants" as depicted in European drawings. Waters said they were not 7 feet tall, but more like 6 feet tall.

When the Pedro Menendez arrived in 1565 and founded St. Augustine, the Timucua greeted him and his estimated 800 travelers.

"That was one of those interesting moments in world history that we really have to appreciate, the collision between old world and the new world," Ste. Claire said.

The Timucuan chief gave his village and his own house to the Spanish, and the Spanish and Timucua lived alongside each other for months, Ste. Claire said, at what is now the Fountain of Youth park.

"For the Americas proper, it was the first time that a European population, 800 in number, merged with the native population," Ste. Claire noted.

"But after 6 months or so, hostilities grew between the two groups," Waters explained.

So the Spanish moved across the water to Anastasia Island and then to what we currently know as the downtown St. Augustine area.

However, the Timucua were not free of the Spanish or eventually the British in Georgia. Franciscan priests traveled around Florida to establish missions, aiming to convert the Timucua and other natives to Catholicism.

Eventually, the Timucua population crashed. When the Spanish arrived, there were possibly 200,000 Timucua. Just two hundred years later, there were fewer than 100, according to Waters.

Historians say forced labor and warfare, and change in diet hurt the Timucua. However, epidemic disease — introduced by the Europeans — really pummeled the Timucua population.

In 1763, about 200 years after Menendez landed, Spain ceded Florida to Great Britain, and the Spanish packed up and left. They took the less than 100 Timucua and other natives to Cuba.

"If there are any Timucua left in the world today, it's likely they live in Cuba," Waters said.

Some historians say there is reason to believe a small group of Timucua stayed behind in Florida or Georgia, and possibly assimilated into other groups, such as the Seminoles.

For now, many historians say there are no known living Timucua.

That is not final end of the Timucua. Waters added that research is underway in Cuba to know if any Timucuan descendants remain.

Also, the Fountain of Youth Park is rebuilding that first, vital Timucua and Spanish settlement, so visitors can get a sense of what it looked like.

It's part of an effort to remember the people who used to walk this land for thousands of years… but who no longer do.

The Timucua were the First Coast's first inhabitants. Sadly, none remain today. FCN's Jessica Clark delves into their rich history as part of our coverage leading up to St. Augustine's 450th anniversary. WTLV