Archeologists believe the Egyptian girl was between 4 and 9 years old when she died, but they haven't determined her cause of death. In a bid to crack the mystery, researchers and West Palm Beach doctors ordered a CT scan for the patient Friday and dubbed her "Mummy Girl" on her official medical charts.

Florida doctors are wrapped up in their oldest patient's case.

The radiology team at St. Mary's Medical Center in West Palm Beach ordered a CT scan for a 2,100-year-old mummy Friday, hoping to discover how she died.

Archeologists believe the Egyptian girl was between 4 and 9 years old when she died between 30 B.C. and 300 A.D., the Sun-Sentinel reported.

Her mummy is set to go on display at the South Florida Science Center and Aquarium, but researchers are determined to solve her death's mystery as she makes her public debut.

On Friday morning, the team loaded the patient — dubbed "Mummy Girl" on her official medical charts — into the CT scanner. While full results won't come back until next week, the initial scan showed the ancient girl still had some of her baby teeth. 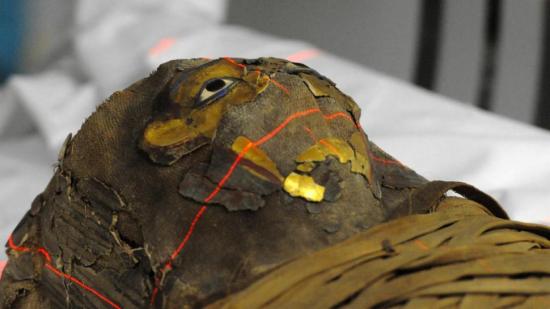 The final diagnosis may be tricky to determine because doctors can't analyze her organs: Per common mummification procedures, all of the girl's internal organs were removed after she died.

Doctors are hoping the scans of her bones will be enough to crack the ancient mystery.

Trauma, infection and cancer are all possibilities, officials said.

"It's not very often you get a 2,100-year-old mummy brought in," Chad Kelman, the director of radiology at St. Mary's, told the Florida newspaper. "It's exciting."