Florence (Italie) : Search Is on for Lost Da Vinci Masterpiece

Search Is on for Lost Da Vinci Masterpiece 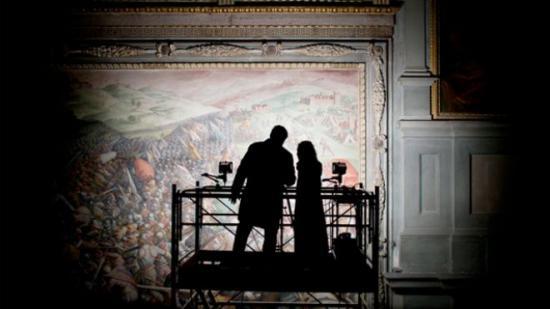 Nuclear physics might soon solve a long-standing Leonardo da Vinci mystery -- the fate of a lost masterpiece known as the "Battle of Anghiari."

The project, one of the most ambitious in art history, involves developing a unique camera which can take photographs through a 5-inch-thick wall.

The brick barrier is not just an ordinary wall. It stands in Palazzo Vecchio, Florence's 14th century city hall, in the imposing Hall of Five Hundred, and houses a mural known as the "Battle of Marciano". It was painted by the renowned 15th-century painter, architect and writer Giorgio Vasari.

Leonardo's lost work could lie right behind that wall, according to art diagnostic expert Maurizio Seracini, director of the Center of Interdisciplinary Science for Art, Architecture and Archaeology at the University of California, San Diego.

The long lost fresco, which Seracini has been searching for since the 1970s, has a mysterious history. It was conceived in 1503, when Leonardo and Michelangelo received twin commissions to paint historic Florentine victories on opposite walls of the Palazzo Vecchio in Florence.

While Michelangelo never got past a sketch of his "Battle of Cascina," Leonardo began to paint the centerpiece of the ''Battle of Anghiari," known as the ''Fight for the Standard," on June 6, 1505, when he was 53.

"Representing vividly the rage and fury both of the men and the horses," as Vasari wrote in his 1550 book "Lives of the Artists," the 12 by 15-foot mural would celebrate the Florentine's victory over Milanese troops in 1440.

Vasari (1511-1574) reported that Leonardo abandoned the project because of technical problems arising from his experimental mixing of oil paint and fresco.

Historians, however, have questioned Vasari's conclusion. Some speculated that he made up the story, and that the fresco actually was completed.

Hailed by Leonardo's contemporaries as his finest work, the "Battle of Anghiari" now survives in several preparatory drawings and sketches by the master himself and in a Rubens drawing which was inspired by an anonymous copy of the fresco.

Ten years after writing his account of the "Battle of Anghiari," Vasari was hired to modify the council room into the Hall of Five Hundred, a hall dedicated to the ruling Medici family.

In the course of this work, Leonardo's mural disappeared. The council room remodeling was part of a city-wide renovation plan devised by Duke Cosimo I to celebrate the Medici family.

As part of this project, Vasari also modified the church of Santa Maria Novella, covering up the 1428 Masaccio fresco "Trinità" with a wall on which he painted a panel of the "Madonna of the Rosary."

Masaccio's work remained obscured until 1861, when Vasari's wall was removed.

In 2000, at a Da Vinci conference, leading scholar Carlo Pedretti proposed that Vasari saved Leonardo's masterpiece just as he had Masaccio's.

The conference prompted Seracini to carry out sophisticated tests that used laser scanners, X-ray machines and thermographic and radar equipment.

First he reconstructed the plan of the hall before Vasari's remodeling by finding the original windows and doors, now covered by walls. Then he focused on Vasari's work.

Since the walls were raised by 21 feet, they had to be reinforced.

Seracini's state-of-the-art technologies showed that Vasari reinforced the walls by building on them large stone frames, which he then filled with bricks to create a surface for his own paintings: the "Battle of Torre" on the west wall and the "Battle of Marciano" on the east wall.

Seracini (the only non-fictional living character mentioned in "The Da Vinci Code") found a Dan Brown-like clue in the wall housing the "Battle of Marciano."

There, on a tiny painted green flag, Vasari wrote: "Cerca, trova" -- seek and you shall find.

A radar survey carried out last week confirmed that on the east wall, which houses the "Battle of Marciano," there is a "discountinuty" between Vasari's brick wall and the original stone wall.

"It means that between the two walls there is a hollow space, possibly created by Vasari to protect Leonardo's work," Seracini told reporters.

Conclusive evidence would come from a special copper-crystal mosaic gamma ray diffraction lens which can map out hidden paint pigments.

He involved Robert Smither, a senior physicist from Argonne National Laboratory's Advanced Photon Source. Smither was already working on such a device for medical use in high-definition tumor imaging.

The camera would work by firing neutrons at the metals contained in Leonardo's pigments. The metals would give off gamma rays which are then focused by the camera's copper crystals (used in place of lens glass).

"We conducted two weeks of testing in Frascati, at the Italian research center ENEA. We used thin layers of pigments and original bricks from the Palazzo Vecchio," Yoder told Discovery News.

"The tests showed that the gamma rays from the pigments can pass through the brick wall, usually quite easily," he said.

The encouraging results suggest that Smither's technology should work well to determine what pigments are behind the wall -- if they are there.

At least $265,000 is needed to build a portable particle accelerator and a germanium crystal detector. So far a fund-raising effort has raised more than $21,000, with 34 days to go.

"We would like to bring people along for the journey to find this painting, not just hold everything for publication after the fact. If there is enough paint, I am confident that we can probably even create an image of the painting," Yoder said.