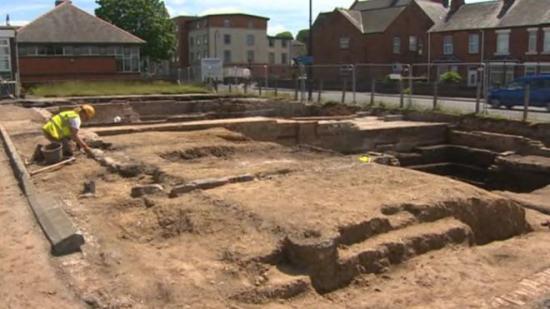 A small piece of Welsh history has been discovered under the remains of a 1960s block of flats in Flintshire.

A team of archaeologists unearthed a section of a 13th Century ditch and dyke believed to have been created to protect workers who built the castle in Flint.

England's Edward I began construction of the castle in 1277.

The 13ft (4m) tall dirt mound is thought to have surrounded the new town, protecting it from Welsh attacks.

The dyke was discovered as the flats were being demolished.

The archaeological dig will eventually be covered again when a new health centre is built on the site. 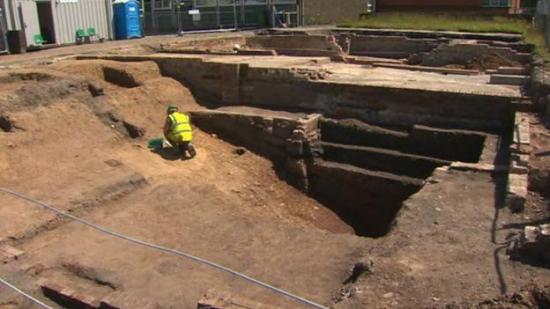 The excavations drop down some 13ft - or 4m

"Flint is an excellent example of an implanted bastide, or town, which was built at the same time as the castle," said Dr Iestyn Jones of Archeology Wales.

"In order to protect the people who had come from all parts of England, they needed a protective system to keep them safe.

"It was attacked several times during the end of the 13th Century and during the Owain Glyndwr rebellion in the early 15th Century.

"But it's amazing to see that it's still here and has been preserved underneath a lot of 19th Century buildings."

Historians had long believed that a dyke system lay beneath the town, with a 1610 map by John Speed depicting the castle and a double concentric dyke system surrounding it from the south and west.

A 1610 map shows some of Flint Castle's outer defences