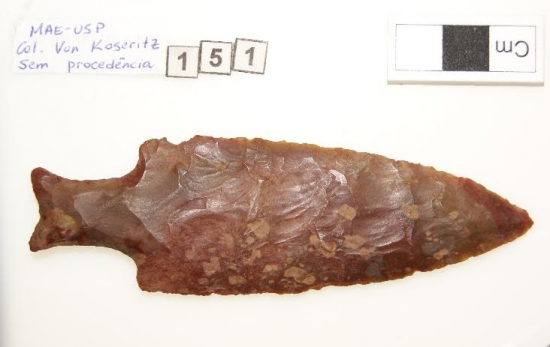 Fishtail points are common in Argentina and Uruguay. Few finds have been recorded in Brazil. The researchers assembled 32 points, mostly from the South and Southeast regions (photo: Mercedes Okumura)

The consensus view of the history of the settlement of the Americas is that the first people who entered and subsequently inhabited the region, called Paleoindians or Paleoamericans, crossed the Bering Strait from Eurasia during the final glacial episodes of the Late Pleistocene period, more than 13,000 years ago. In the ensuing millennia, the Paleoindian tribes spread out across North America and then migrated into South America. The study of percussion-flaked stone projectile points is a key focus for research on this original settlement process.

The story begins in 1929, when 13,500-year-old stone points were found near Clovis, a town in New Mexico (USA). For over half a century, US archeologists insisted that these slender stone tools proved the Clovis culture to be the oldest in the hemisphere, despite growing evidence from South America that this was not the case.

In fact, prehistoric sites found in South America in the past 20 years, such as Monte Verde in Chile, El Abra in Colombia, Piedra Museo in Argentina and Taima-Taima in Venezuela, are contemporaneous with Clovis, if not older. They were occupied by Paleoindians from the Late Pleistocene onward. Furthermore, the stone points found at these South American sites are very different both from the Clovis artifacts and from each other.

How long did the tribes from the North take to spread out across South America to the extent that their lithic points became so diversified? No answer to this question has been produced so far. Two recently published studies on Brazilian lithic points raise fresh doubts about the diversity and antiquity of these tools and the cultures to which they belonged.

The first systematic study of fishtail stone projectile points found in Brazil is co-authored by Mercedes Okumura, an archeologist affiliated with the University of São Paulo’s Museum of Archeology & Ethnology (MAE-USP), and is part of the project “Statistical methods applied to the characterization of Paleoindian lithic industries from Southern Brazil”, supported by FAPESP. Okumura is currently at the Federal University of Rio de Janeiro’s National Museum (MN-UFRJ).

The second project, “The Paleoindian occupation of São Paulo State: a geoarcheological approach”, also supported by FAPESP, investigates the distribution and use of stone projectile points found in southern Brazil. The principal investigator is archeologist Astolfo Araujo, also from MAE-USP, and Okumura is an associated researcher on this project. 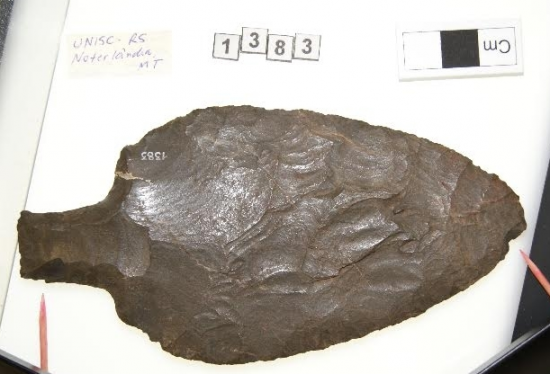 Fishtail points, so named because of their shape, are very common in Argentina and Uruguay. “Only a few sporadic finds have been recorded in Brazil,” Okumura said. “We combed through museum and private collections and managed to locate 32 points, mostly from the South and Southeast regions, although some were from Mato Grosso State and Goiás State in the Center-West. We even located two points that had been found in Bahia State and Amazonas State. Until recently, the consensus on fishtail points was that they were typical of Uruguay and Argentina, but today, we know they also occur, albeit more sparsely, in Brazil and as far north as Venezuela and Guyana.”

Fishtail points here in the Southern Cone are different from the stone points found at Monte Verde in southern Chile and from those found in Colombia and Venezuela, “although these sites are all contemporaneous,” according to Okumura. South American points, in turn, have very little in common with North American points. The differences are cited by archeologists who insist that the Clovis culture is no older than Paleoindian cultures.

“What does this all mean?” Okumura asked. “The differences among all these points suggest South America may have been settled earlier.” In Argentina, fishtail points have datings that range from 12,900 to 12,300 years before the present (BP). In Brazil, no datings exist, either because the points were found on the surface or because no one has managed to date them yet. Datings for the Monte Verde points are around 13,500 BP, but the site is known to have been occupied at least 18,000 years ago. The oldest-dated archeological sites in Brazil are Santa Elina (Mato Grosso), dated at 25,000 BP, and Pedra Furada (Piauí), dated at 32,000 BP, but there is no consensus on either dating among scholars.

“The most exciting part of our article is that we were able to present all this material for the first time,” Okumura said. “It’s an invitation to other researchers to start paying attention to these stone points found in places as far apart as the South, Northeast and Amazon regions of Brazil. What may this mean in terms of settlement, migration and trade systems?”

A next step for the research project will involve studying the origin of the rocks from which the points were made, in most cases silexite, basalt or mudstone. Another future direction is to investigate how the points were used, i.e., whether they were for spears, darts, arrows or knives. “The longer, sharper ones may have been used as darts or spearheads,” Okumura said. Frequent use and damage required rework, often with recycling for other uses. “There are points that have been reworked so much that they’ve lost their original shape and become stumps, which we call scrapers. Our study raises many more questions than answers. Unfortunately, that’s the price you pay when you break new ground.”

The second project includes a survey of the points belonging to the Umbu tradition, “which is named for a site in Rio Grande do Sul State, where they were found in the 1970s,” Araujo explained. This is the first systematic study to investigate the functions and uses of these Brazilian points.

The study selected only points found at precisely dated sites, all in the South region. “There are only eight acceptably dated archeological sites with a good number of points in all of Brazil,” Okumura said.

The 463 points surveyed have datings that range from the Early Holocene (11,000 BP) to the Middle Holocene (5,000 BP) and the Late Holocene (600 BP). Analysis of their uses showed that only a small proportion were used as arrowheads. The vast majority were for darts or atlatls. “Why these people from the Umbu tradition made so many missile points, we don’t know,” Araujo said.

The researchers were especially intrigued by the relationship between the size of the points and their antiquity. “We expected to see the same pattern as in North America, where the older the archeological site, the larger the points, and vice versa, i.e., the more recent the site, the smaller the points found there,” Okumura said. This has to do with the emergence of bow-and-arrow technology in the Middle Holocene and the way in which projectiles changed over time. “But the pattern we detected was precisely the reverse: what we found were large dart points occurring throughout the sample and small points at the oldest site, which dates from almost 11,000 years ago.”

To try to elucidate the question, the researchers must find new points in archeological digs that are reliably dated. They also plan to investigate morphology, materials and use wear, as well as breaks and other damage.

The article “New records of fishtail projectile points from Brazil and its implications for its peopling” (doi:10.2218/jls.v3i1.1312), by Daniel Loponte, Mercedes Okumura and Mirian Carbonera, can be read in the Journal of Lithic Studies (2016) atjournals.ed.ac.uk/lithicstudies/article/view/1312"s/article/view/1312.