First Migration from Africa Less Than 95,000 Years Ago 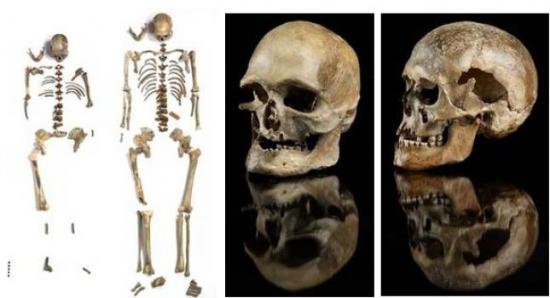 Recent measurements of the rate at which children show DNA changes not seen in their parents -- the "mutation rate" -- have challenged views about major dates in human evolution.

In particular these measurements have made geneticists think again about key dates in human evolution, like when modern non-Africans split from modern Africans. The recent measurements push back the best estimates of these dates by up to a factor of two. Now, however an international team led by researchers at the University of Tübingen and the Max Planck Institute for Evolutionary Anthropology in Leipzig, present results that point again to the more recent dates. The new study is published in Current Biology.

The team, led by Johannes Krause from Tübingen University, was able to reconstruct more than ten mitochondrial genomes (mtDNAs) from modern humans from Eurasia that span 40,000 years of prehistory. The samples include some of the oldest modern human fossils from Europe such as the triple burial from Dolni Vestonice in the Czech Republic, as well as the oldest modern human skeletons found in Germany from the site of Oberkassel close to Bonn.

The researchers show that pre-ice age hunter-gatherers from Europe carry mtDNA that is related to that seen in post-ice age modern humans such as the Oberkassel fossils. This suggests that there was population continuity throughout the last major glaciation event in Europe around 20,000 years ago. Two of the Dolni Vestonice hunter-gatherers also carry identical mtDNAs, suggesting a close maternal relationship among these individuals who were buried together.

The researchers also used the radiocarbon age of the fossils to estimate human mutation rates over tens of thousands of year back in time. This was done by calculating the number of mutations in modern groups that are absent in the ancient groups, since they had not yet existed in the ancient population. The mutation rate was estimated by counting the number of mutations accumulated along descendent lineages since the radiocarbon dated fossils.

Using those novel mutation rates -- capitalizing on information from ancient DNA -- the authors cal-culate the last common ancestor for human mitochondrial lineages to around 160,000 years ago. In other words, all present-day humans have as one of their ancestors a single woman who lived around that time.

The authors also estimate the time since the most recent common ancestor of Africans and non-Africans to between 62,000-95,000 years ago, providing a maximum date for the mass migration of modern humans out of Africa. Those results are in agreement with previous mitochondrial dates based on archaeological and anthropological work but are at the extreme low end of the dates sug-gested from de-novo studies that suggest a split of non-Africans from Africans about thirty thousand years earlier.

"The results from modern family studies and our ancient human DNA studies are in conflict" says Krause. "One possibility is that mutations were missed in the modern family studies, which could lead to underestimated mutation rates." The authors argue that nuclear genomes from ancient mod-ern humans may help to explain the discrepancies.

The above story is reprinted from materials provided by Universitat Tuebingen.

Recent analyses of de novo DNA mutations in modern humans have suggested a nuclear substitution rate that is approximately half that of previous estimates based on fossil calibration. This result has led to suggestions that major events in human evolution occurred far earlier than previously thought.

Though single loci like mitochondrial DNA (mtDNA) can only provide biased estimates of population divergence times, they can provide valid upper bounds. Our results exclude most of the older dates for African and non-African population divergences recently suggested by de novo mutation rate estimates in the nuclear genome.