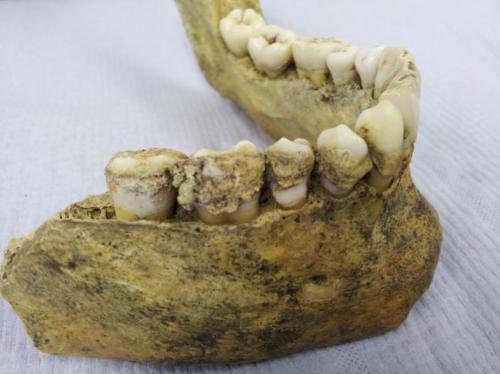 Human mandible with extensive dental calculus deposits dated to the Roman period (1st-4th century CE) from York, UK. The dental calculus pictured above tested positive for milk proteins. Credit: Malin Holst.
Led by a University of Oklahoma professor, an international team of researchers has discovered the first evidence of milk consumption in the ancient dental calculus—a mineralized dental plaque—of humans in Europe and western Asia. The team found direct evidence of milk consumption preserved in human dental plaque from the Bronze Age to the present day.
"The study has far-reaching implications for understanding the relationship between human diet and evolution," said Christina Warinner, professor in the OU Department of Anthropology. "Dairy products are a very recent, post-Neolithic dietary innovation, and most of the world's population is unable to digest lactose, often developing the symptoms of lactose intolerance." Warinner led a group of researchers from the universities of York and Copenhagen, and the University College London.

Understanding how, where and when humans consumed milk products is a necessary link between human consumption and their livestock. The new research provides direct protein evidence that the milk of all three major dairy livestock—cattle, sheep and goats—has been consumed by human populations for at least 5,000 years. This corroborates previous evidence for milk fats identified on pottery and cooking utensils in early farming communities.

"The discovery of milk proteins in human dental calculus will allow scientists to unite these lines of evidence and compare the genetic traits and cultural behaviors of specific individuals who lived thousands of years ago," said Warinner. 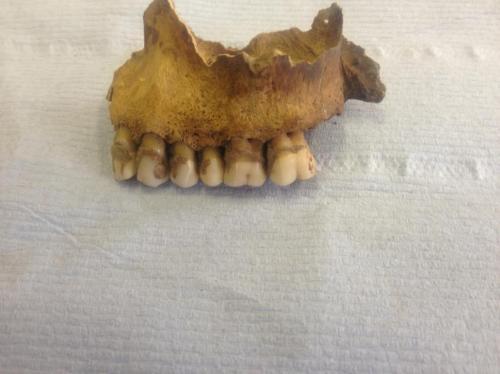