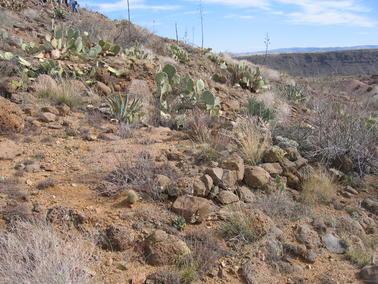 Ancient rock terraces installed by the inhabitants of the mesa, used to slow down and direct water flow to crops. Photo by Melissa Kruse-Peeples.

There’s a common misconception that prior to European contact in the 15th century, the Americas were a pristine, untouched wilderness, inhabited by people who lived in complete harmony with their environment. In reality, humans have been affecting and influencing their surroundings as long as we’ve existed.

Legacies on the Landscape, a collaborative project among archeologists and ecologists from Arizona State University, is an ongoing effort to determine the degree to which ancient peoples’ actions continue to affect landscapes today.

The focus of the study is the Agua Fria National Monument, a 71,000-acre area of mesas and grasslands located approximately 40 miles north of Phoenix. Within the monument, numerous prehistoric sites allow researchers to examine the impact inhabitants of the mesa had on their environment. In particular, the ASU researchers are studying Perry Mesa, a high expanse of desert landscape, cut by canyons.

“The monument is a giant laboratory,” says Katherine Spielmann, the archeology lead on the project and professor in the School of Human Evolution and Social Change within the College of Liberal Arts and Sciences. “It allows us to work on the entire landscape of a prehistoric community, which contains hundreds of habitation, agricultural and special-purpose sites.”

Within this giant laboratory are some prehistoric artifacts vital to determining humanity’s environmental impact: rocks.

Specifically, 700-year-old rock terraces installed on the sloping hills of the mesa, which were used to slow down and direct water flow to crops.

“Because these terraces exist, we can see where prehistoric people actually farmed,” says Spielmann. “In most parts of the Southwest, although we know people farmed, they didn’t modify the landscape so we can’t say for sure where. At Agua Fria, we can see exactly where they farmed and look at what transformation farming caused.”

Determining exactly what changes these terraces and the people who made them had on the landscape is where the ecological half of the project comes in.

“The people of Perry Mesa manipulated their surroundings in numerous ways,” says ecologist Sharon Hall, a professor in the Schools of Life Sciences and Sustainability. “They planted and cultivated agave, which are still growing near abandoned settlements today. They removed rocks from soils to build rooms and houses, which altered patterns of fire and the distribution of woody plants. The rock-terraced hill slopes still perform their intended function of slowing water runoff and have led to altered soil properties and plant communities.”

“The details of the soil’s information that the ecologists have brought to the table make us archaeologists think about the productivity of the landscape in the past,” says Spielmann.

One archeology doctoral student, Melissa Kruse-Peeples, is looking at the soil’s productivity in relation to ancient farming.

With the use of buried probes that measure soil moisture and a local rain gauge, Kruse-Peeples is monitoring water and nutrient dynamics within the prehistoric agricultural fields.

“By examining the modern conditions I can estimate what conditions would have been like in the ancient past,” says Kruse-Peeples.

Along with the program’s ecologists, Kruse-Peeples is studying the productivity of the soil by looking at runoff and nutrient value of the water that is deposited on the terraced fields during rainstorms. The study will answer whether or not rainfall replenished the fields sufficiently for sustainable corn production.

“Nutrient-rich runoff is higher in terraced areas, indicating that the stone terraces were significant in terms of nutrient replenishment and therefore prolonged the use life of a field,” says Kruse-Peeples. “But this strategy of terracing may have ultimately been unsustainable.”

By exploring the extent to which the Agua Fria residents affected the environment through agricultural production, researchers also may answer why the settlement was abandoned so soon after its establishment.

Tree ring data documents a period of extreme drought that swept through much of the Southwest in the late 1200s, forcing many people to relocate from ancestral homelands to better-watered places, such as Agua Fria. Because some villages were built in what appear to be defensive locations, the people there may have been concerned about external threats. Why would they abandon such an ideal set-up?

“Did they farm out all the nutrients? Did they deplete all their resources?” asks Hall.

Our society today is not as dependent on the immediate environment as the people of Perry Mesa were. Even so, the story that the researchers are uncovering could have modern applications.

“The cautionary tale about using up local resources is out there already,” says Spielmann. “What we’re coming to understand about prehistoric agriculture will help us interpret the archeology of the Southwest. There are a lot of assumptions about what runoff agriculture does, which we are examining through the Legacies project.”

In addition to expanding knowledge of the desert Southwest, the findings of Agua Fria may have uses for semi-arid environments elsewhere in the world, such as Sub-Saharan Africa and parts of Asia.

“There’s potential that some of the things we learn might be helpful to farmers of the same scale, households that are dry-farming,” says Spielmann.

Whether or not the research will benefit modern small-scale farmers remains to be seen, but the project’s realization of ancient people’s imprint on our world remains paramount.

“What we’re trying to understand is how people modified the environment, maybe in subtle ways, and if these changes have lasting impacts today,” says Hall.

Legacies on the Landscape is funded by the National Science Foundation and the Bureau of Land Management.