Fighting may have shaped evolution of human hand

Fighting may have shaped the evolution of the human hand, according to a new study by a US team. 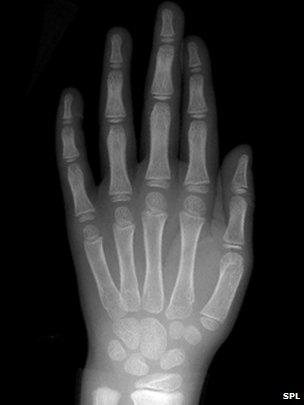 The bones of the hand line up into a strong, buttressed structure in a fist

The University of Utah researchers used instruments to measure the forces and acceleration when martial artists hit a punch bag.

They found that the structure of the fist provides support that increases the ability of the knuckles to transmit "punching" force.

Details have been published in the Journal of Experimental Biology.

"We asked the question: 'can you strike harder with a fist than with an open palm?'," co-author David Carrier told BBC News.

"We were surprised because the fist strikes were not more forceful than the strikes with the palm. In terms of the work on the bag there is really no difference."

Of course, the surface that strikes the target with a fist is smaller, so there is more stress from a fist strike.

"The force per area is higher in a fist strike and that is what causes localised tissue damage," said Prof Carrier.

"There is a performance advantage in that regard. But the real focus of the study was whether the proportions of the human hand allow buttressing (support)."

The team found that making a clenched fist did indeed provide protective buttressing for the delicate bones of the hand. Making a fist increased the stiffness of the second meta-carpo-phalangeal, or MCP, joint (these joints are the knuckles visible when the hand is clenched as a fist) by a factor of four.

It also doubled the ability of the proximal phalanges (the bones of the fingers that articulate with the MCP joints) to transmit a punching force.

In their paper, Prof Carrier and Michael H Morgan from the University of Utah's school of medicine, point out that the human hand has also been shaped by the need for manual dexterity. But they say that a number of different hand proportions are compatible with an enhanced ability to manipulate objects.

X-ray of normal hand The bones of the hand line up into a strong, buttressed structure in a fist

"There may, however, be only one set of skeletal proportions that allows the hand to function both as a mechanism for precise manipulation and as a club for striking," the researchers write.

"Ultimately, the evolutionary significance of the human hand may lie in its remarkable ability to serve two seemingly incompatible, but intrinsically human, functions."

Our closest relatives, chimpanzees and bonobos do not generally form fists, and the researchers think they are unable to: when a chimp curls up its fingers it forms a doughnut shape.

Prof Carrier commented: "The question for me is 'why wasn't this discussed 30, 40 years ago.' As far as I know it isn't in the literature."

Asked whether the idea that aggression may have played a key role in shaping the human body might previously have been unpalatable to researchers, Prof Carrier explained: "I think we're more in that situation now than we were in the past.

"I think there is a lot of resistance, maybe more so among academics than people in general - resistance to the idea that, at some level humans are by nature aggressive animals. I actually think that attitude, and the people who have tried to make the case that we don't have a nature - those people have not served us well.

"I think we would be better off if we faced the reality that we have these strong emotions and sometimes they prime us to behave in violent ways. I think if we acknowledged that we'd be better able to prevent violence in future."