FERGUS ESTUARY (IRELANDE): Irish medieval fishing site will be 'lost to the tide'

Irish medieval fishing site will be 'lost to the tide' 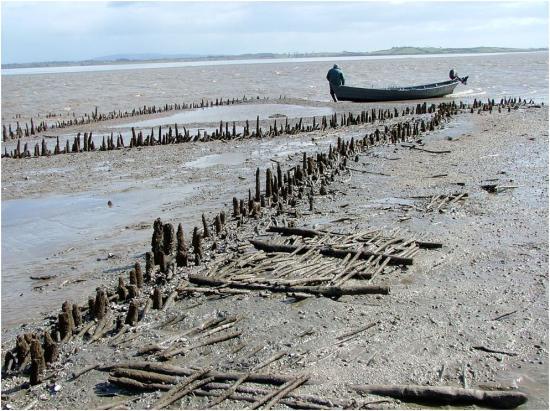 700-year-old fish weir in the Fergus Estuary, County Clare, Ireland, which the UCD archaeologists have been examining. (All images copyright UCD School of Archaeology)

One of Europe’s best preserved medieval fishing structures located on the Fergus Estuary in County Clare, Ireland, will be washed away by tidal flows before archaeologists can reveal its secrets.

A team of University College Dublin archaeologists who have been visiting the remote 700 year old fishing site will no longer be able to conduct their scientific recording and analysis, due to recent budget cuts experienced by the Irish Heritage Council.

“There is little we can do to preserve the medieval fishing structures because they are totally exposed to the forces of nature on the mudflats, after being buried for centuries beneath the mud,” explains Dr Aidan O’Sullivan, UCD School of Archaeology, University College Dublin.

“They are likely to be entirely destroyed within the next ten years.”

“We had hoped that by working with the local community we could record this significant archaeological site before it is destroyed.”

Located about 1.5km from the nearest dryland in the Fergus Estuary in County Clare, Ireland, the medieval fishweirs [wooden structures] are in the very middle of a vast landscape of mudbanks and water channels.

The archaeological site can only be accessed by boat for a few short weeks in the summer when the tide is extremely low.

“The mudflats are too deep and dangerous to walk on,” says Dr O’Sullivan. “Even when we can see them at low tide, we only have about 2 to 3 hours at most to examine them,” he explains.

“There are serious logistical and practical difficulties involved in gathering the data and taking samples.”

The wooden fishweirs are long wooden fences of upright posts interwoven with wattle that converge in a V-shape on the estuary mudflats close to the low water mark.

“We can see wooden ropes with knots tying together the structure and most remarkably, we have even found woven, conical baskets intact in the clays at the ends of the weirs. It is almost as if someone had walked off and left these baskets there last year,” says Dr O’Sullivan.

In the Middle-Ages, any fish dropping down with the ebbing tide would have encountered these fences and would have been guided into the end of the weir, where they would have been trapped by baskets and nets.

“Medieval fishermen would have travelled out here by boat at low tide to build and repair the weirs and to remove the catch every day,” says Dr O’Sullivan.

“It is not known who built and used the fishweirs, but it seems likely that they were owned and managed by the Augustinian Abbey on Canon Island.”

“Fish was a hugely important part of the diet of medieval clerics, given the number of saints’ days in the yearly calendar. And the fish would also likely have been supplied for the dining tables of local lords.”