There is a possibility that early Chinese navigators made their way to Peru and left their influence. 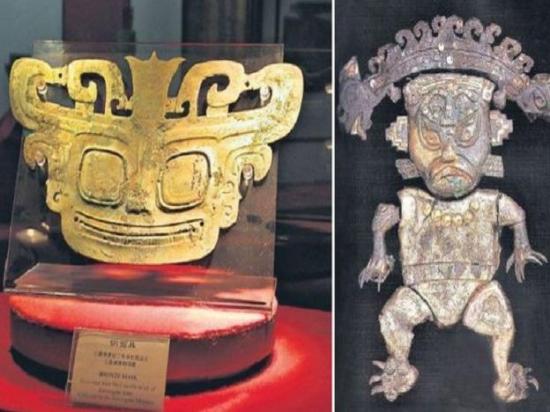 Signs reveal a possible link between the ancient Shang culture of China and pre-Inca groups of the Americas, according to experts.

Artistic depictions in the archaeology depict all too similar themes and characters between the two otherwise very distant cultures. However, coincidence is not enough and Chinese archaeologists are willing to search for hard evidence via DNA testing.

One such Chinese archaeologist is Tang Jigen who specializes in the history of the Shang Dynasty, who existed c. 1600 BC – 1046 BC.

“So far we have no evidence, although there are Chinese scholars who have proposed this theory from legends about the displacement of a group belonging to the Shang Dynasty. We must make deeper comparative studies,” Tang, of Academy of Social Sciences of China, tells El Comercio.

Tang and his team in China are so curious and nearly sure of the matter that they are willing to fund the experimentation that will take DNA samples from remains.

It is said that when the Shang Dynasty collapsed, the dynasty’s prince, Prince Yin, left China and headed east with his army. Chinese experts claim this group is the spark that ignited so many cultures of the Americas, including the Chavín and Mochica of Peru. They support this claim through the parallel in timing of the end of the Shang Dynasty corresponding to the beginning of these aforementioned cultures in the Americas.

Song Baozhong and Wang Dayou are two other scientists that have been dedicated to this case for the last 20 years. In 2006 they toured through Peru, Ecuador, and Bolivia to follow the footsteps of what has been dubbed, “the journey of Yin to the east.” It is through this journey of Prince Yin that many Chinese experts believe many South American peoples developed their cultures.

Many similarities exist among these groups as exhibited in the sacrificial practices and the creature with marked nostrils, large teeth, horns, claws, protruding eyes, and a subtle feline-esque character. The possible influence reached as far as Nazca, Paracas, and even as late as the Incas in the pottery, textiles, and geoglyphs of those regions. The fact however is that so far, there is no scientific evidence that Chinese groups did cross the vast ocean to the Americas.

“Although so far we can not conclude that the Yin crossed the ocean towards Mesoamerica. We are still far from that point,” says Tang.

“We have reached the point where it is necessary to do scientific studies. I propose to compareDNA from remains of the Shang Dynasty to the Chavín culture or later. We can send samples to laboratories in the US or Canada. Only with these tests would a shared past be validated,” argues Tang.

Scientific proof of these suggestions would have great implications not just for the history of the Americas but the world. For starters, Christopher Columbus would be knocked off his pedestal once again.