A University of Exeter archaeologist’s research has uncovered the largest Roman settlement ever found in Devon. The discovery could force us to rewrite the history of the Romans in Britain.

The discovery of a large Roman Settlement in Devon was the result of a chance metal detecting coin find.  Danielle Wootton, the Finds Liaison Officer for the Portable Antiquities Scheme (PAS) and archaeologist at the University of Exeter was called on to investigate further.

Two metal detectorists discovered nearly a hundred Roman coins in a series of fields a several miles west of Exeter. This would not be unusual in other parts of Britain but it has always been thought that Roman influence never made it this far into Devon as there is little evidence of Romans in the South West Peninsula of Britain. 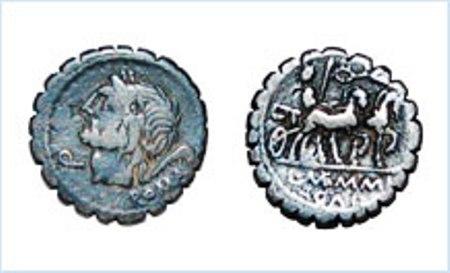 After the results of a geophysical survey Wootton was astonished to find evidence of a huge settlement including roundhouses, quarry pits and track ways. The site covers at least thirteen fields and is the first of its kind for the county.

Wootton received funding from the British Museum, the Roman Research Trust and Devon County Council Archaeology Service to carry out a trial excavation on the site in June. This has uncovered evidence of trade with Europe, a road possibly linking to the major settlement at Exeter, and some intriguing structures, as well as many more coins.

University of Exeter archaeologist Danielle Wootton said: “This is a really exciting discovery, but we are just at the beginning: there's so much to do and so much that we still don't know about this site. I'm hoping that we can turn this into a community excavation for everyone to be involved in, including the metal detectorists. I am very grateful to Earthwatch for funding next years excavations , but we still need more funding to run the excavation.

“Most exciting of all, we have stumbled across two burials that seem to be located along the side of the settlement's main road. It is early days, but this could be the first signs of a Roman cemetery and the first glimpse of the people that lived in this community.”

Sam Moorhead, National Finds Adviser for Iron Age and Roman coins for the PAS at the British Museum, believes that this is one of the most significant Roman discoveries in the country for many decades. He said: “It is the beginning of a process that promises to transform our understanding of the Roman invasion and occupation of Devon. I believe we may even find more settlements in this area in the next few years.”

Future excavations at the site are being funded by Earthwatch, Devon County Council and the University of Exeter, and will be directed by Danielle Wootton in conjunction with the University’s Roman archaeology specialist, Dr. Ioana Oltean. The project will provide the wider community and University students with an exciting opportunity for fieldwork experience and training.