The story of Christopher Columbus sailing across the ocean to discover America is something that all children from the United States learn and memorize. Of course, most of it is a myth, and much of what we learned as children is actually part of a larger misconception about this whole period. Columbus did not set out to prove the world was round- in fact he just got lucky that he did bump into a continent. He did not discover America- America was already populated by millions of people, and had already been discovered by the Vikings if we’re talking about the first European discovery. What Columbus found was the Bahamian archipelago of Haiti and the Dominican Republic, which at the time was named Hispaniola by the Spanish. Most important to remember, is that Columbus himself thought he found a back route to Asia, and maintained this notion his entire life. What did he do then? He discovered a new trade route that moved along a specific wind pathway known as the westerlies which easily moved ships back and forth between the continents. He also began a movement of exploration and conquest which would completely change the entire world.

Bioarchaeology is not going to be able to reveal much more about Columbus’ well-documented life, but it can tell us about the men who traveled with him on this incredible voyage into the unknown.

A new study by Tiesler et al. (2014) examines the human remains from Columbus’ second trip to the Americas. During this second voyage, the first permanent European colony, La Isabela, was set up in the Dominican Republic. The town was started in 1494 and after only four years it was abandoned. This study looks at the individuals who did not survive this short period of occupation due either to the harsh conditions of travel or an inability to adapt to the new living conditions. The collection has 48 individuals excavated from the settlement’s churchyard, 45 of which were found in the area behind the church. Only 27 individuals were available for pathological analysis due to the poor preservation or lack of context for the remaining bones. Of the collection, there were 26 adult males, 7 adolescent males, 3 adult females and 4 sub-adults. No individuals fell into the old adult category of 50 years or greater. 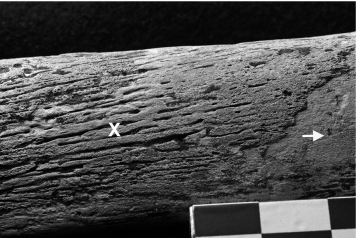 The paleopathological analysis of the sample found only one healed femoral midshaft fracture, some evidence of enthesopathies (muscular markers that show signs of activity), and early signs of degenerative joint disease such as arthritis. Beyond those, the most common pathology seen was subperiosteal bone deposition and porotic striation on the diaphysis (diaphysis is the long straight section of the long bones). Out of 27 individuals where paleopathological assessment was possible, 20 had these signs of new bone formation along their long bones. Both subperiosteal bone deposition and porotic striation appear as raised areas of new bone formation- it often looks like tree bark with the raised appearance and deep lines. Most were found on both right and left tibiae and fibulae (lower leg bones), and signs of healing were apparent in the majority.

Based on their analysis of the paleopathology, they argue that it is not likely a sign of infection (due to lack of inflammation) or trauma (due to lack of other evidence for this). Instead, this pattern of bone formation is often found in populations suffering from specific nutritional deficiencies such as scurvy (vitamin C deficiency), osteomalacia (vitamin D deficiency) or anemia (iron deficiency). Most likely given the context, lifestyle of the crew and types of bone formation, many of the individuals who died at La Isabela were suffering from scurvy. Documentary evidence shows that the settlers of La Isabela faced a long voyage aboard a ship with limited resources, and when they arrived were further faced with starvation. Scurvy requires at least 1-3 months of vitamin C deficiency to become apparent on the skeleton- with the two month voyage and lack of resources upon arrival in the Dominican Republic, it isn’t surprising that rates of scurvy were high. Further, this documentary evidence reveals that none of the rations for the voyagers included anything rich in vitamin C.

Upon arrival to La Isabela, the new colony attempted to maintain their Spanish lifestyle by living in a manner similar to home and maintaining preferences for European food that was shipped to the Americas. By not making an attempt to adapt or utilize their new environment, it isn’t surprising that many died with nutritional deficiencies. It is important to remember that scurvy didn’t cause their death- rather it made them more vulnerable to new pathogens and the hard lifestyle. However, as Tiesler et al. (2014) note in the conclusion, the loss of lives by the colonizers was minimal in comparison with the native communities who were wiped out due to exposure to disease and violence in this period.

Tiesler, V., Coppa, A., Zabala, P., & Cucina, A. (2014). Scurvy-related Morbidity and Death among Christopher Columbus’ Crew at La Isabela, the First European Town in the New World (1494-1498): An Assessment of the Skeletal and Historical Information International Journal of Osteoarchaeology DOI: 10.1002/oa.2406