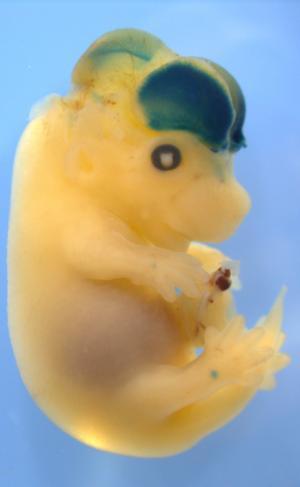 The human version of a DNA sequence called HARE5 turns on a gene important for brain development (gene activity is stained blue), and causes a mouse embryo to grow a 12 percent larger brain by the end of pregnancy than an embryo injected with the chimpanzee version of HARE5. Credit: Silver lab, Duke University
The size of the human brain expanded dramatically during the course of evolution, imparting us with unique capabilities to use abstract language and do complex math. But how did the human brain get larger than that of our closest living relative, the chimpanzee, if almost all of our genes are the same?
Duke scientists have shown that it's possible to pick out key changes in the genetic code between chimpanzees and humans and then visualize their respective contributions to early brain development by using mouse embryos.

The team found that humans are equipped with tiny differences in a particular regulator of gene activity, dubbed HARE5, that when introduced into a mouse embryo, led to a 12% bigger brain than in the embryos treated with the HARE5 sequence from chimpanzees.

The findings, appearing online Feb. 19, 2015, in Current Biology, may lend insight into not only what makes the human brain special but also why people get some diseases, such as autism and Alzheimer's disease, whereas chimpanzees don't.

"I think we've just scratched the surface, in terms of what we can gain from this sort of study," said Debra Silver, an assistant professor of molecular genetics and microbiology in the Duke University Medical School. "There are some other really compelling candidates that we found that may also lead us to a better understanding of the uniqueness of the human brain."

Every genome contains many thousands of short bits of DNA called 'enhancers,' whose role is to control the activity of genes. Some of these are unique to humans. Some are active in specific tissues. But none of the human-specific enhancers previously had been shown to influence brain anatomy directly.

In the new study, researchers mined databases of genomic data from humans and chimpanzees, to find enhancers expressed primarily in the brain tissue and early in development. They prioritized enhancers that differed markedly between the two species.

The group's initial screen turned up 106 candidates, six of them near genes that are believed to be involved in brain development. The group named these 'human-accelerated regulatory enhancers,' HARE1 through HARE6.

The strongest candidate was HARE5 for its chromosomal location near a gene called Frizzled 8, which is part of a well-known molecular pathway implicated in brain development and disease. The group decided to focus on HARE5 and then showed that it was likely to be an enhancer for Frizzled8 because the two DNA sequences made physical contact in brain tissue.

The human HARE5 and the chimpanzee HARE5 sequences differ by only 16 letters in their genetic code. Yet, in mouse embryos the researchers found that the human enhancer was active earlier in development and more active in general than the chimpanzee enhancer.

"What's really exciting about this was that the activity differences were detected at a critical time in brain development: when neural progenitor cells are proliferating and expanding in number, just prior to producing neurons," Silver said.

The researchers found that in the mouse embryos equipped with Frizzled8 under control of human HARE5, progenitor cells destined to become neurons proliferated faster compared with the chimp HARE5 mice, ultimately leading to more neurons.

As the mouse embryos neared the end of gestation, their brain size differences became noticeable to the naked eye. Graduate student Lomax Boyd started dissecting the brains and looking at them under a microscope.

"After he started taking pictures, we took a ruler to the monitor. Although we were blind to what the genotype was, we started noticing a trend," Silver said.

All told, human HARE5 mice had brains 12% larger in area compared with chimpanzee HARE5 mice. The neocortex, involved in higher-level function such as language and reasoning, was the region of the brain affected.

Producing a short list of strong candidates was in itself a feat, accomplished by applying the right filters to analysis of human and chimpanzee genomes, said co-author Gregory Wray, professor of biology and director of the Duke Center for Genomic and Computational Biology.

"Many others have tried this and failed," Wray said. "We've known other people who have looked at genes involved in brain size evolution, tested them out and done the same kinds of experiments we've done and come up dry."

The Duke team plans to study the human HARE5 and chimp HARE5 mice into adulthood, for possible differences in brain structure and behavior. The group also hopes to explore the role of the other HARE sequences in brain development.

"What we found is a piece of the genetic basis for why we have a bigger brain," Wray said. "It really shows in sharp relief just how complicated those changes must have been. This is probably only one piece—a little piece."