Evolution's past is modern human's present : ancient interbreeding inside Africa

Evolution's past is modern human's present

Mandenka, Biaka and San tested for DNA evidence of ancient interbreeding inside Africa

The past is present when it comes to human evolution.

That seems to be the takeaway from new research that concludes "archaic" humans, somewhere in Africa during the last 20-60 thousand years, interbred with anatomically modern humans and transferred small amounts of genetic material to their offspring who are alive today. 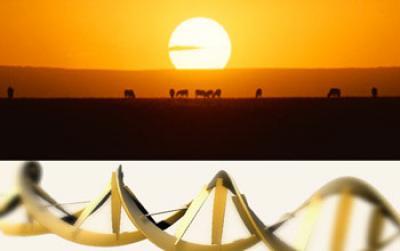 University of Arizona geneticist Michael Hammer and a team of evolutionary biologists, geneticists and mathematicians report the finding in today's Proceedings of the National Academy of Sciences.

"It appears some level of interbreeding may have occurred in many parts of the world at different times in human evolution," said Hammer, whose work is the first to definitively suggest interbreeding between separate human forms inside of Africa.

As Hammer and colleagues write in their recent report, "Given recent fossil evidence, however, the greatest opportunity for introgression was in Africa" where anatomically modern humans and various archaic forms co-existed for much longer than they did outside of Africa.

"We estimate that the archaic DNA fragments that survive in modern African genomes come from a form or forms that diverged from the common ancestor of anatomically modern humans 700 thousand to 1 million years ago," said Hammer.

"This archaic genetic material is more prevalent in west-central African populations, possibly reflecting a hybridization event or process that took place in central Africa," he said. "The populations that interbred were similar enough biologically so that they were able to produce fertile offspring, thus allowing genes to flow from one population to the other."

The Mandenka are an agricultural population from West Africa, while the Biaka and the San are historically isolated hunter-gatherer populations from Central and Southern Africa, respectively.

The team conducted extensive simulations to test the likelihood of gene flow from an archaic population to anatomically modern humans. The simulations rejected the default position, or null hypothesis, that no admixture took place.

The result gave the scientists confidence to infer that contemporary African populations contain a small proportion of genetic material--about 2 percent--that moved from a species of archaic humans into the gene pool of anatomically modern humans about 35 thousand years ago.

They surmise that this archaic population split from the ancestors of anatomically modern humans about 700 thousand years ago.

"We do not have ancient DNA, i.e., from a fossil specimen, to directly compare with DNA from contemporary populations, so our approach was indirect or inferential," said Hammer. But there are several candidates in the African fossil record that may have added their genetic material to modern humans such as Homo heidelbergensis, an extinct species of the genus Homo that lived between 600 and 400 thousand years ago.

"This study represents an approach to answering long-standing questions about the contributions of archaic, extinct forms of our genus to the gene pool of our modern human species," said Carolyn Ehardt, Program Director for Biological Anthropology at NSF. "Previous to the advent of contemporary genetic techniques and approaches, the addressing of such pivotal questions in bioanthropological science was prohibitive."

Additionally, the research could provide greater insight into human physiology and assist the understanding of human diseases.

"It is entirely possible that some of the genes that were picked up from archaic forms by the ancestors of modern Africans were beneficial and are now part of the functional physiological machinery of contemporary populations," said Hammer. "This could be in the form of disease resistance alleles or other gene variations that led to novel adaptations in the modern population."

The research was funded by an NSF HOMINID grant that seeks to improve understanding of human origins.