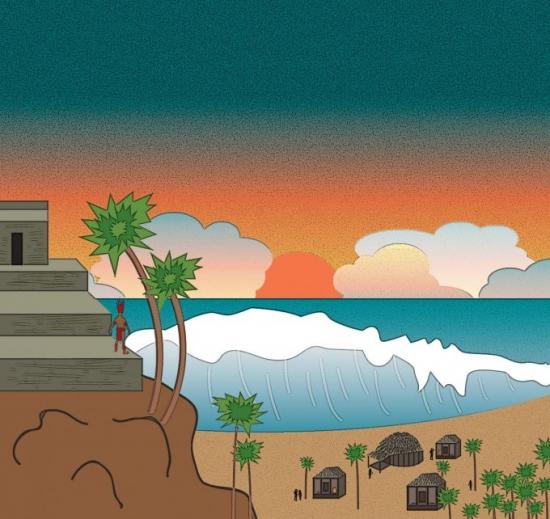 “The force required to rip this reef material from the seafloor and deposit it that far above the shoreline had to have been tremendous,” said CU-Boulder scientist Larry Benson. “We think the tsunami wave height was at least 15 feet and potentially much higher than that.” Credit: Illustration by Samantha Davies, University of Colorado

The eastern coastline of Mexico's Yucatan Peninsula, a mecca for tourists, may have been walloped by a tsunami between 1,500 and 900 years ago, says a new study involving Mexico's Centro Ecological Akumal (CEA) and the University of Colorado Boulder.

There are several lines of evidence for an ancient tsunami, foremost a large, wedge-shaped berm about 15 feet above sea level paved with washing machine-sized stones, said the researchers. Set back in places more than a quarter of a mile from shore, the berm stretches for at least 30 miles, alternating between rocky headlands and crescent beaches as it tracks the outline of the Caribbean coast near the plush resorts of Playa del Carmen and Cancun.

Radiocarbon dates of peat beneath the extensive berm indicate a tsunami, which may have consisted of two or even three giant waves, likely slammed the coastline sometime after A.D. 450. In addition, ruins of Post-Classic Mayan structures built between A.D. 900 and 1200 were found atop parts of the berm, indicating the tsunami occurred prior to that time.

"I was quite shocked when I first walked these headlands and saw this large berm paved with boulders running long distances in both directions," said CEA scientist Charles Shaw. "My initial thought was that a huge wave came through here in the past, and it must have packed quite a punch."

A paper on the subject by Shaw and Larry Benson, an adjunct curator of anthropology at the University of Colorado Museum of Natural History, was published online this week in theJournal of Coastal Research.

The boulders that cover the face and top of the berm are composed of coral and fine-grained limestone, said Benson. "The force required to rip this reef material from the seafloor and deposit it that far above the shoreline had to have been tremendous," he said. "We think the tsunami wave height was at least 15 feet and potentially much higher than that."

In addition, the researchers have found "outlier berms," spanning some 125 miles along the Yucatan coastline that suggest the tsunami impacted a very large region. "I think there is a chance this tsunami affected the entire Yucatan coast," said Benson.

The berm is composed of two layers of coarse sand as well as both small and large boulders. The beaches between the headland areas contain mostly sandy carbonate material with small boulders that likely were eroded from nearby bays during the event, said Shaw.

t is not clear what might have caused the tsunami, which can be triggered by a variety of events ranging from earthquakes and underwater landslides to volcanic eruptions and oceanic meteor strikes. While scientists have found evidence a "super-typhoon" deposited rocky berms on the Australian coastline, the sediments in those berms occur in well-sorted bands, while the Yucatan berm is composed of coarse, unlayered sands suggesting different processes were involved in sediment deposition.

"If hurricanes can build these types of berms, why is there only a single berm off the Yucatan coast given the numerous hurricanes that have made landfall there over the past century?" said Shaw. "That is a big part of our argument for a tsunami wave. We think we have the pieces of evidence we need for this event to have occurred."

Benson and Shaw suggest the tsunami could be more accurately dated by coring mangrove swamp sediments found along the coast in order to locate the carbonate sand deposited by the massive wave, then radiocarbon dating the peaty material above and below the sand.

One implication of the Yucatan tsunami is the potential destruction another one could cause. While the geologic evidence indicates tsunamis in the region are rare -- only 37 recorded in the Caribbean basin since 1492 -- the Yucatan coastline, which was only lightly populated by Mayans 1,500 years ago, is now home to a number of lavish resort communities and villages inhabited by some 1.4 million people.

If such an event occurs in the future, it would wreak havoc along the built-up coastline, probably with a great loss of life," said Benson. But it's far more likely that powerful hurricanes like the Class 5 Hurricane Gilbert that made landfall on the Yucatan Peninsula in 1988, killing 433 people in the Caribbean and the Gulf of Mexico and causing more than $7 billion in damage, will slam the coastline, said the researchers.

Shaw's research was funded by the CEA, which was founded in 1993 in Akumal to produce and promote strategies for ecosystem management in the region through research, education and policy. Benson's research was funded in part by the U.S. Geological Survey. Benson is a former USGS scientist.