Ear mutilation is an interesting thing. I say interesting, because when I really think about it, there seem to be quite a few historical and pop-cultural references to this kind of behavior. In ‘Reservoir Dogs’, Mr. Blonde removes the ear of a police officer while doing a little dance to “Stuck in the Middle”. Vincent van Gogh sliced off his own ear and delivered it wrapped up to a Parisian brothel- though the actual chain of events leading up to and causing this event are not well-understood. From historical accounts of the Vietnam war, there are a number of references to ears being removed from the deceased as a form of trophy. In ‘The Walking Dead’, Daryl Dixon creates an ear necklace from once again dead zombies. The last place I expected to see something about ear trophies was in the International Journal of Osteoarchaeology. 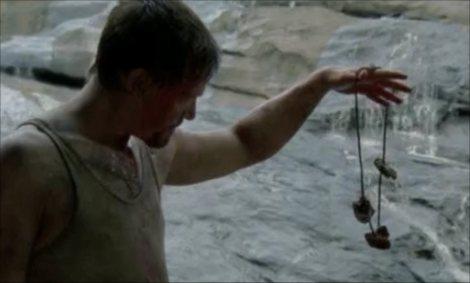 Historically, it has been recognized that the taking of trophies from the dead can represent a range of activities from veneration of one’s ancestor to gaining prestige over one’s enemies. Throughout North America, scalping was a known practice from prehistory into the colonial period. Identification of scalping in human remains is done by assessing cut-marks along the cranium which often present themselves as deep v-shaped lines. Scalping has been characterized by the amount of skin removed from simple scalp removal of skin and hair along top of cranium, compound removal which includes removing portions of the ears or face, partial removal of only hair or multiple removal where a number of individuals divide up portions of the scalp (Nadeau 1941).

A new article by De Vore and Jacobi (2014) examines the evidence for compound scalp removal, specifically focusing on the evidence available for ear removal. Ethnohistoric accounts have suggested that ear removal was an enduring practice in North America, though it may have been geographically limited to specific areas- however there is little bioarchaeological discussion of the practice. In their study, De Vore and Jacobi (2014) examine the human remains of individuals excavated in the Tennessee River Valley in order to determine whether this practice was occurring. The sample consists of individuals with known scalping trauma. If cut-marks were located around the temporal bone (where the ear is located), then the marks were categorized by type of cut including straight-slicing (single straight cut-mark), straight-sawing (multiple connected straight cut-marks), chatter-sawing (cut-marks in straight lines moving in z formation), scraping and sabrage (glancing blows that create circular depressions).

They determined that there were five individuals from this region that show evidence of compound scalping involving the removal of the ear. The first was a 20 to 30-year old male that dated from 1200-1400 CE, and evidence for ear removal was only found on the left ear. The second and fifth victims had evidence on both temporal bones for ear removal and both were older adults from the Late Archaic (3000-1000 BCE). The third and fourth were both females from the Mississippian period (800-1500 CE), the younger one showing left ear only and the older individual showing both ears being removed.

Based on their analysis of the patterns of cut-marks on each individual, De Vore and Jacobi (2014) determined that first the scalp was removed, and the ear was removed as part of a second act. Their evidence does not support Nadeau’s 1941 classification which argues ear removal occurred as part of scalp removal- rather they were separate removal acts. The fact that the scalp and ears were removed as different pieces suggests that they had different meanings or intentions. Scalps have been associated with communal prestige, where they propose that the ear could have been kept as an indicator of individual prestige (this is based on conjecture, the real purpose is not known). Their research also reveals two other important points- first, that this was practiced over a long period of time, and second, it wasn’t as common as scalp removal.

They conclude with a brief warning to those studying scalping in North America- that they shouldn’t assume that ear removal was part of scalp removal, but rather carefully examine the pattern of cut-marks. I think this is a fascinating article, not only because it is about an interesting practice of trophy collecting, but because it disproves the assumption that if the ear was removed and the individual was scalped, that it was part of the same practice and had similar intentions. The sample is quite small however, and it will be interesting to see whether this pattern continues if more individuals are added.