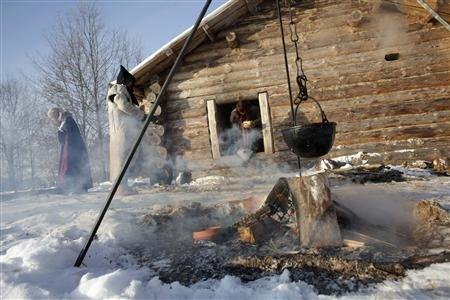 ROUGE, Estonia (Reuters) - Ever wondered what it was like to endure an Iron Age winter?

Five students in the small Baltic state of Estonia, who have abandoned modern conveniences for a week in a replica wooden hut built on the site of an ancient hill fort, have discovered that Iron Age accommodation was mainly cold, dark and smoky.

"You can't heat and be in the building and after dark there is no light," said Kristiina Paavel, 24, one of the students.

"We tried the old method of burning a cinder of wood for light, but it gave too much smoke, so we will just go to sleep earlier tonight," she told Reuters.

Dressed in layers of dark woolen and felt clothes and covered with asheepskin coat while she crochets, Paavel said there are some basic issues modern humans take for granted such as smokeless heating and light at night.

"We were worried about the cold weather and heating, but after this morning we feel a little more confident we can last the five days," Paavel said after the temperature fell to -25 degrees Celsius Monday.

The log hut's design was from before chimneys were in use and took two years to cut and assemble by hand. It sits on top of the foundations of an original Iron Age building excavated in 1955.

The five sleep on a single low platform covered with hay, sheepskin and cloth across the back wall of the building.

Inside, acrid smoke fills the windowless room and flows out of a small square door and a small vent in the wall.

Kristin Ott squatted on the earthen floor beneath a cloud of smoke cutting up meat and putting it in wooden dishes.

In the corner, an open fire burned with rocks placed on top to help preserve the heat over the night.

The students get water from melting snow.

"Although some of the Iron Age life is romantic, it is more comfortable in the modern world," said Paavel.

"Things I miss from the modern world would be a chimney, toilet paper and electricity for light."