Oysters from Mesolithic period middens at Ertebølleruten in Northeast Denmark were opened using fire and not with a special tool, recent experiments have shown.

The experiments were carried out by archaeologists Esben Kannegaard from Jutland Museum and Søren H. Andersen, professor emeritus from the University of Aarhus. “You do not need to use force or any special technique to open an oyster, a brief warming is enough,” said the archaeologists in the latest issue of the journal Skalk.

The experiments showed that they could open oyster shells in minutes by simply placing them on the embers of a fire or heated stones without compromising the taste. 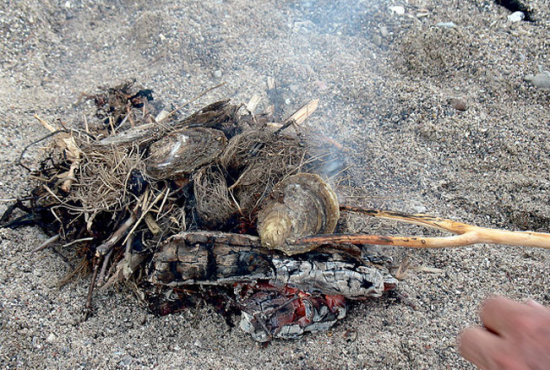 Opening oyster shells on the embers of a fire. Image: Museum Østjylland

The background to the experiment was to explain the huge quantities of oyster, mussel and cockle shells found in famous midden sites which are known from Ertebølleruten, where there are thick layers dated to c. 6000 years ago.  These kitchen middens contain no evidence of tools required to open oyster shells, which would need to be be thin, strong and flexible. In addition, the shells show no damage or evidence of tool use but occasionally exhibit slight traces of exterior scorching.

When the archaeologists laid the whole oysters on heated stones, or the embers of a fire, after 2-3 minutes there was a small puff of steam from the shells, and they opened up 1cm and could then be easily twisted apart. 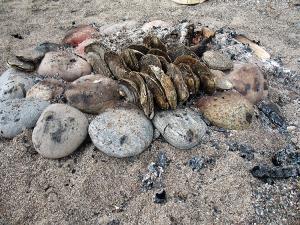 The archaeologists concluded that this was most likely the correct method as it corresponds with the evidence from the shell middens. The amount of shells left behind also shows that oysters were not an insignificant supplement to general sustenance but a common food source for our ancestors. The tests showed that it would take around 10-15 of these warm oysters to feel well fed.

Cookery books today contain detailed instructions on how to open the shells with a (oyster) blade of steel, which has a short and wide blade. Still considered a tricky pastime, each year international championship competitions are held, dedicated to the art of oyster shell opening.