In recent years, the current range and area of the Erlitou site have been basically made clear. Also, a road system in a“井”shape, the imperial palace, the walled workshop area and the turquoise workshop were found outside the palace district. While, several large-scale architecture complexes with central axis layout dating to the early and the late period of the Erlitou Culture, and several noble tombs with elaborate grave goods were found in the palace district. Combined the above work with the information from the exploration and excavations in the earlier years, we knew the cultural connotation, the layout and the change of some parts of the site over times. We also made clear the entire layout of the site. In order to know the detailed features of the site, the Erlitou working team, IA CASS, explored and excavated the palace district of the Erlitou site from the spring 2010 to the spring 2011. 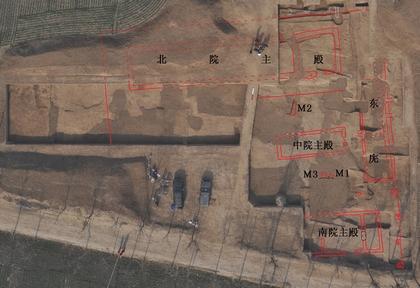 The explored area was located in the north of the palace area and it covered about 3ha. Through exploring, the distribution of the cultural remains in the north of the palace district was basically made clear and these cultural remains included a giant pit, 3 places with ash concentration distribution, large-area rammed earth and several road surfaces. The giant pit was located in the northeast of the palace district. It was 3-5 meters to the west side of the east wall and 13 meters to the north wall of the imperial palace. Moreover, its plan shape was close to a square with 66 meters long in east-west and 33 meters wide in south-north. The total area of this giant pit was about 2200 square meters, and its depth was generally 4-4.6 meters but the deepest place reached to 6.7 meters underground. The three places with ash concentration distribution were located in the north and northeast of the imperial palace and their areas were about hundreds of square meters individually. 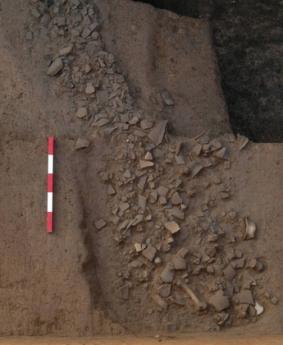 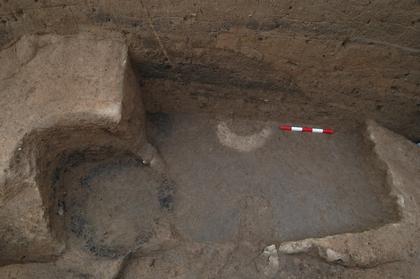 As with the No.3 foundation, the noble tombs dating to the phase II of the Erlitou Culture were found within north and middle court of the No.5 foundation respectively. The tombs were large-scale and some luxurious artefacts were unearthed there, including turquoise, lacquer goods, and lots of potteries (including white potteries). These tombs were under the Han cultural stratigraphy and destroyed the rammed-earth and the road layers belonging to the No.5 foundation. They are the important materials for studying the burial system in the Erlitou Culture, the date and the characters of the No.5 foundation.

The east and the west sides of the giant pit were test excavated. The roads both inside and outside of the walls of the imperial palace which is in the east of the giant pit, were paved with red burned earth and calcified lime stone, and the date of the roads was later than the formation age of the giant pit. There were the continuous deposits from the late Phase I to the late Phase IV of the Erlitou Culture in the giant pit, but the remains dating to the Phase II of the Erlitou Culture is the main deposit of the giant pit and its total depth is about 1-3 meters. Many cultural remains were discovered, including activity surfaces covered with large quantity pottery shards, sacrifice remains with pig offerings, house foundation whose floor was rammed and burned, a kitchen range and hard road surface due to a long-term tread, etc. There were three sacrifice sites with pigs as sacrificial offerings. One of them was composed of three entire baby pig skeletons and several mandibles of baby pigs. Three baby pigs were laid together, facing to the left side. 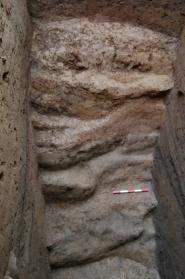 Two of them were laid very close and facing to each other in south-north direction. One head is nearly facing to the south and the other to the north. They were all about half years old. In the Phase IV, there were road surfaces partly covered with pottery shards. Some stems of plants, trace of rotten leaves, silt rust trace were visible in the multi-stratigraphy deposit in the giant pit. These showed that this pit was immersed by water for a long time.

According to the analysis to the texture and color of the earth in many places, we considered that the giant pit was formed in order to solve the earth needed by the construction. It formed no later than the Phase II of the Erlitou Culture. After the giant pit was formed, some activities, such as sacrifice and resident, were ever held, so that pig bones used for sacrifice, house ruin and road surface were left. Later on, it was gradually silted up, filled up and full until Han Dynasty. 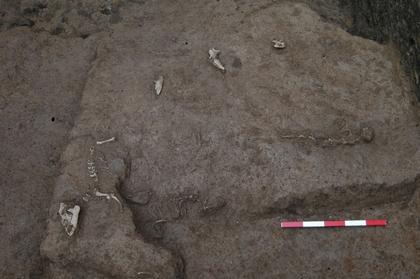 This coring and excavation is very significant. First of all, the remains distribution in the north of the imperial palace, layout and partition were learned more. Secondly, No.5 foundation is the large-scale rammed-earth foundation dating to the early phase of the Erlitou Culture which was the one best preserved so far. The excavation and the study on it are very helpful to make clear the details about the palace construction and the layout of the palace district during the early phase of the Erlitou Culture. Thirdly, the discovery of the giant pit enriched the cultural connotation of the imperial palace and supplied the clues for exploring the sources of the earth used for the construction of the rammed-earth foundation in the imperial palace. While, the large-scale remains related to sacrifice found in the north of the palace complex, supplied important information for studying the source of the sacrifice system related to the Yanshi city dating to the Shang Dynasty. Fourthly, continuous cultural deposits dating to the Phase I to Phase IV of the Erlitou Culture were discovered in the giant pit. Among them, the series of samples, including the rich potteries, charcoal and animal skeletons, supplied more important details for the periodization and chronology of the Erlitou Culture. Fifthly, hundreds of soil samples collected at random and at the fixed locations during the excavation supplied important series samples for identifying the composition of the soil, the pollen analysis, the faunal and floral species of the genus, and restoring the environment and economic life during the Erlitou Culture.    (Translator: Zhai Shaodong)