Measuring subsistence intensification in the archaeofaunal record has provided strong evidence for socioeconomic shifts related to sedentarization in the terminal Pleistocene Mediterranean Basin, but the precise timing and scale of the intensification trend and its place in the evolution of settled societies remain contentious. New archaeofaunal data from the key Natufian sequence of el-Wad Terrace (Mount Carmel, Israel, ca. 15.0–11.7 ka [thousands of years ago]) is used here to clarify and contextualize paleoeconomy and mobility trends in the latest Pleistocene Levant, representing the culmination of Epipaleolithic subsistence strategies. Taphonomic variables serve as supplementary indicators of habitation function and occupation intensity along the sequence. At el-Wad, a very broad range of animals, mostly small to medium in size, were captured and consumed. Consumption leftovers were discarded in intensively occupied domestic spaces and suffered moderate attrition. The Early (ca. 15.0–13.7/13.0 ka) and Late (ca. 13.7/13.0–11.7 ka) Natufian phases display some differences in prey exploitation and taphonomic markers of occupation intensity, corresponding with other archaeological signals. We further set the intra-Natufian taxonomic and demographic trends in perspective by considering the earlier Epipaleolithic sequence of the same region, the Israeli coastal plain. Consequently, we show that the Early Natufian record constituted an important dietary shift related to greater occupation intensity and sedentarization, rather than a gradual development, and that the Late Natufian record appears to be maintaining, if not amplifying, many of these novel signals. These conclusions are important for understanding the mode and tempo of the transition to settled life in human evolution. 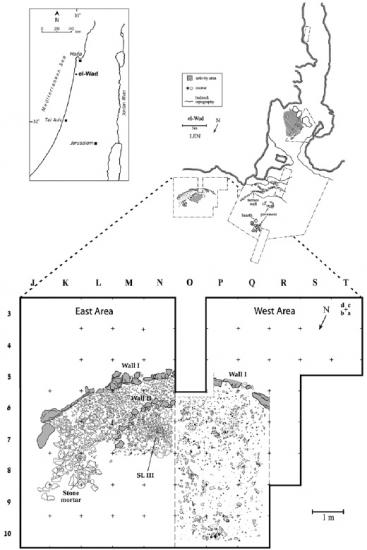 Map showing the location of el-Wad, a general plan of the site, and a plan of the renewed terraceexcavation showing the Late Early Natufian (LEN) layer. The architectural complex of Wall I (large “terracewall”) delimits numerous living levels, of which a portion of Structure II (Wall II) is shown in the East Areaof the excavation and a rich living surface overlying it is depicted in the West Area