- New hypotheses point out that the government of the ancient city was not held by one single person, but a group identified with the name 13 Rabbit.
- Dr Arturo Pascual Soto declared that at the Building of the Columns reliefs depict a delegation of power scheme. 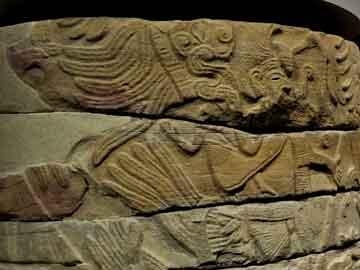 New hypotheses about the last stage and government of El Tajin civilization point out to a rule that was not exclusive of one person but of several, as announced in a conference series organized by the National Institute of Anthropology and History (INAH).

According to studies performed at the Veracruz archaeological zone by Dr Arturo Pascual, from the National Autonomous University of Mexico (UNAM), El Tajin experimented in its last stage intense transformations in its government and ideology that were captured in its architecture and iconography.

In this sense, near 800-850 AD, the ancient Mesoamerican city suffered a profound change in its government after the accession of a new group of a lineage linked to the figure of 13 Rabbit, depicted at the Edificio de las Columnas pillars.

At the reliefs, characters with the same calendar name are represented at the western portico (dated between 800-850 AD) and at the eastern one (900-950 AD).
“With this evidence –explained the former director of the archaeological zone- and knowing that there is more than one century between both sculptural conjuncts, it is not possible that we are talking about the same ruler. Anyhow, they appear to be different characters that are related to the same lineage group and not different imagining of a specific individual”.

”I believe 13 Rabbit and his people were not necessarily from other place of Mesoamerica, since they did not abruptly ended the El Tajin cultural universe. Instead, archaeological data at the Building of Columns show a sequence of facts that runs in the sense of transformation, but still tries to equilibrate at the principles that traditionally harmonized the society”.

Arturo Pascual commented that the mention of other characters at the pilasters of Edificio de las Columnas, such as lords 8 Deer and 8 Movement, does not refers to a shared government at El Tajin, but to a scheme of power delegation regarding administrative functions.

The UNAM expert considered that facing the changes at El Tajin around 800 AD, it is necessary to review chronologies for the final stage of this civilization, hypothetically located in the Epi Classic period, (900 to 1100 of the Common Era).

”If we are to depict the final epoch of El Tajin, we might have to “squeeze” things less and locate them in a more dynamic political and social scenario, placing them in a greater time lapse, approximately between 800 and 1200 AD”.

Author of El Tajín. En busca de los orígenes de una civilización (2006) y El Tajín. Arte y poder (2010), mentioned that the final stage at the city (800-900 AD) was marked by astronomical observation, an activity reserved to the elite that resulted on the calendar count of Venus apparitions as the morning star.