EL SITRON (Espagne) : Bones give peek into the lives of Neanderthals

Bones Give Peek Into the Lives of Neanderthals 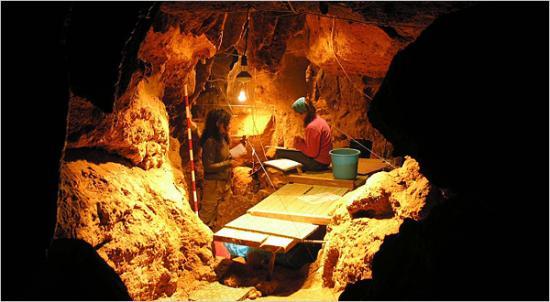 Deep in a cave in the forests of northern Spain are the remains of a gruesome massacre. The first clues came to light in 1994, when explorers came across a pair of what they thought were human jawbones in the cave, called El Sidrón. At first, the bones were believed to date to the Spanish Civil War. Back then, Republican fighters used the cave as a hide-out. The police discovered more bone fragments in El Sidrón, which they sent to forensic scientists, who determined that the bones did not belong to soldiers, or even to modern humans. They were the remains of Neanderthals who died 50,000 years ago.

Today, El Sidrón is one of the most important sites on Earth for learning about Neanderthals, who thrived across Europe and Asia from about 240,000 to 30,000 years ago. Scientists have found 1,800 more Neanderthal bone fragments in the cave, some of which have yielded snippets of DNA.

But the mystery has lingered on for 16 years. What happened to the El Sidrón victims? In a paper this week in The Proceedings of the National Academy of Sciences, Spanish scientists who analyzed the bones and DNA report the gruesome answer. The victims were a dozen members of an extended family, slaughtered by cannibals.

All of the bones were located in a room-size space the scientists dubbed the Tunnel of Bones. They were mixed into a jumble of gravel and mud, which suggests that the Neanderthals did not die in the chamber. Instead, they died on the surface above the cave.

Their remains couldn’t have stayed there for long. “The bones haven’t been scavenged or worn out by erosion,” said Carles Lalueza-Fox of Pompeu Fabra University in Barcelona, a co-author of the new paper. Part of the ceiling in the Tunnel of Bones most likely collapsed during a storm, and the bones fell into the cave.

As the researchers examined bone fragments, they tried to match them to each other. Some loose teeth fit neatly into jawbones, for example. “The whole thing was quite complicated. In fact, it was a mess,” said Dr. Lalueza-Fox.

After spending years on these anatomical jigsaw puzzles, Dr. Lalueza-Fox and his colleagues could identify 12 individuals. The shape of the bones allowed the scientists to estimate their age and sex. The bones belonged to three men, three women, three teenage boys and three children, including one infant.

Once the scientists knew who they were dealing with, they looked for DNA in the bones. The cold, damp darkness of El Sidrón has made it an excellent storehouse for ancient DNA. Dr. Lalueza-Fox and his colleagues have published a string of intriguing reports on their DNA. In two individuals, for example, they found a gene variant that may have given them red hair. They launched an ambitious project to find DNA in the teeth of all 12 individuals. In one test, they were able to identify a Y chromosome in four. The scientists had already identified all four of them as males — the three men and one teenage boy — based on their bones.

The scientists then hunted for mitochondrial DNA, which is passed from mothers to their children. They looked for two short stretches in particular, called HVR1 and HVR2, that are especially prone to mutate from generation to generation. All 12 Neanderthals yielded HVR1 and HVR2. The scientists found that seven of them belonged to the same mitochondrial lineage, four to a second, and one to a third.

Dr. Lalueza-Fox argues that the Neanderthals must have been closely related. “If you go to the street and sample 12 individuals at random, there’s no way you’re going to find seven out of 12 with the same mitochondrial lineage,” he said. “But if you go to the birthday party for a grandmother, chances are you’ll find brothers and sisters and first cousins. You’d easily find seven with the same mitochondrial lineage.”

All three men had the same mitochondrial DNA, which could mean they were brothers, cousins, or uncles. The females, however, all came from different lineages. Dr. Lalueza-Fox suggests that Neanderthals lived in small bands of close relatives. When two bands met, they sometimes exchanged daughters.

“I cannot help but suppose that Neanderthal girls wept as bitterly as modern girls faced by the prospect of leaving closest family behind on their ‘wedding’ day,” said Mary Stiner, an anthropologist at the University of Arizona.

Linda Vigilant, an anthropologist at the Max Planck Institute for Evolutionary Anthropology in Germany, considers the research “a nice start.” But she challenges Dr. Lalueza-Fox’s claim that the Neanderthals must be immediate family because they belong to the same mitochondrial lineage. In her own work on wild chimpanzees, she finds that some chimpanzees with identical HVR1 and HVR2 are not closely related.

The best way to settle the debate, said Dr. Vigilant, is to find more Neanderthal DNA to which the El Sidrón genes can be compared. “It is exciting to think that we might actually be able to tackle the question in the near future,” said Dr. Vigilant.

Dr. Lalueza-Fox thinks it may be possible to draw a detailed genealogy of the El Sidrón Neanderthals in the next few years. He also hopes to get a better idea of how they died. The stone blades may provide a clue. They were made from rocks located just a few miles away from the cave. The victims might have wandered into the territory of another band of Neanderthals. For their act of trespass, they paid the ultimate price.