Scientists have discovered the remains of a group of Neanderthals in northern Spain who were butchered and eaten by a group of local cannibals, according to research presented at the Royal Society in London.

A cache of bones which had clearly been cracked open using tools has been analysed in a painstaking study over the past 13 years.

First discovered deep inside the El Sidron cave system in 1994, the bones had been preserved for 51,000 years and have now been analysed using modern-day CSI forensic techniques.

According to reports in the Sunday Times, Carles Lalueza-Fox of the Institute of Evolutionary Biology in Barcelona told the Society the slaughtered group included three children aged from two to nine, three teenagers and six adults.

“They appear to have been killed and eaten, with their bones and skulls split open to extract the marrow, tongue and brains,” he said.

“All had been butchered. It must have been a big feast.”

Dr Lalueza-Fox said the bone pile likely washed through a sinkhole from a rocky shelter above, eventually settling in the small alcove of the cave system where they were found. 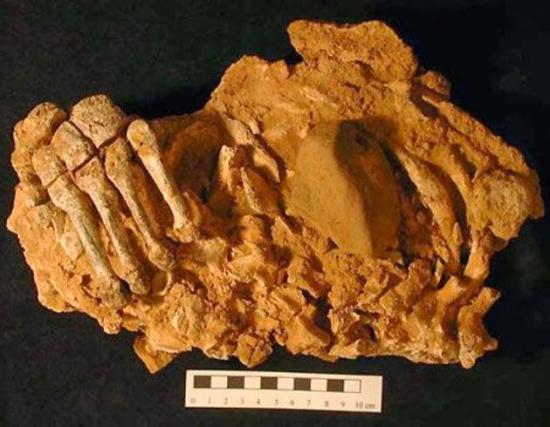 Neanderthal foot bones in a block of cemented sand and clay from the El Sidrón cave in Spain [Credit: PNAS/Rosas et al'

This meant they were kept in a condition unlike almost any other Neanderthal remains, and proved a perfect snapshot of a single, deadly clash, likely between two local gangs.

The tools found at the site of the slaughter came from a few kilometres away, Dr Lalueza-Fox said, suggesting their fellow early human attackers were probably also their neighbours.

Finally, scientists proposed a theory for the motive behind the attack – and a simple one at that.

Unlike the earliest anatomically modern humans, who coped with periods of food shortage by joining forces in large, efficient groups, Neanderthals tended to gather in small family gangs of around 10-12.

When times were tough in winter, this meant they had to resort to extreme measures.

Dr Lalueza-Fox said: “I would guess they were killed in winter when food was short. There is no evidence of any fire so they were eaten raw immediately and every bit of meat was consumed. They even cut around the mandibles of the jaw to extract the tongues.”