Archaeologists in Guatemala uncovered a jade burial mask more than 700 years old while excavating the tomb of a fourth-century king revered in his time as a god.

The burial chamber, the oldest uncovered in the Mayan city of Waka, was discovered by archaeologists of the U.S.-Guatemalan El Perú-Waka’ Archaeological Project. Previous research at the site revealed six royal tombs and sacrificial offering burials dating to the fifth, sixth and seventh centuries.

“The Classic Maya revered their divine rulers and treated them as living souls after death,” said research co-director David Freidel, professor of anthropology in arts and sciences at Washington University in St. Louis.

“This king’s tomb helped to make the royal palace acropolis holy ground, a place of majesty, early in the history of the Wak dynasty,” he continued.

Excavation shows a stone cup in the center, surrounded by bones.MINISTRY OF CULTURE AND SPORTS OF GUATEMALA

The discovery of the jade mask was key to identifying the tomb as belonging to a member of the royal lineage. It was found in the Waka palace acropolis, in a newly discovered tunnel.

The mask, painted red in with cinnabar paint, was discovered beneath the head of the ruler. Archaeologists at the Mayan period’s most famous site, Tikal, discovered a similar greenstone mask during excavations in the 1960s in a Mayan royal tomb, dating to the first century A.D.

The mask depicts the ruler with the forehead hair decoration of the civilization’s maize god, a common portrayal of Mayan culture’s deified kings. Other symbolic motifs on the mask indicate further associations with the maize god.

Other artifacts recovered from the tomb included included 22 ceramic vessels, Spondylus shells from a local variety of mollusks, jade ornaments and a shell pendant carved to resemble a crocodile. The remains of the ruler and some ornaments, like the portrait mask, were painted bright red.

The archaeologists said there is evidence the tomb was reentered at least once around 600 A.D., and it's possible that the bones were painted at that time.

Waka is located some 40 miles west of Tikal, in Laguna del Tigre National Park. At the height of its power, before the Spanish conquest, the royal city commanded major trade routes running north to south and east to west.

Freidel has directed research at the site in collaboration with anthropologists Juan Carlos Pérez Calderon of San Carlos University in Guatemala and Damien Marken of Bloomsburg University in Pennsylvania since 2003. 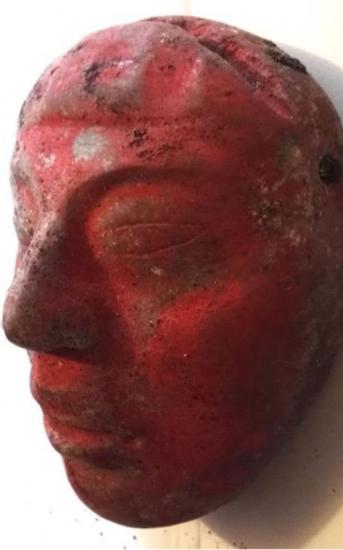 Jade mask from the Waka tomb, painted red with cinnabar paint. MINISTRY OF CULTURE AND SPORTS OF GUATEMALA