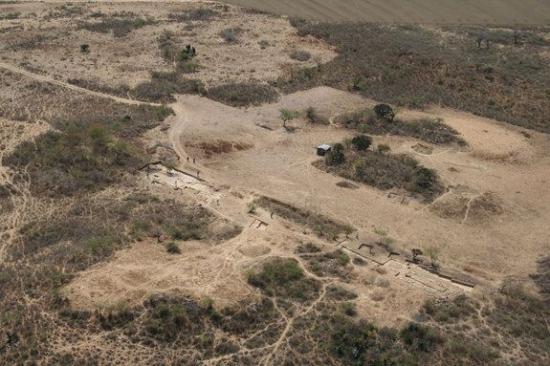 A newly discovered temple complex in the Valley of Oaxaca, Mexico, reveals hints of a specialized hierarchy of priests — who may have committed human sacrifice.

The evidence of such sacrifice is far from conclusive, but researchers did uncover a human tooth and part of what may be a human limb bone from a temple room scattered with animal sacrifice remains and obsidian blades. The temple dates back to 300 B.C. or so, when it was in use by the Zapotec civilization of what is now Oaxaca.

Archaeologists have been excavating a site in the valley called El Palenque for years. The site is the center of what was once an independent mini-state. Between 1997 and 2000, the researchers found and studied the remains of a 9,150-square-foot (850 square meters) palace complex complete with a plaza on the north side of the site. Radiocarbon dating and copious ash reveal that the palace burned down sometime around 60 B.C. or so. [See Images of the Ancient Temple Site] 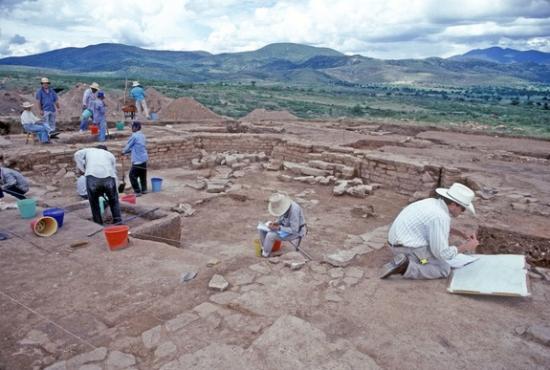 Across from the temple is the El Palenque palace, shown here during excavations. Credit: Charles Spencer and Elsa Redmond

Now, the archaeologists have unearthed an even larger complex of buildings on the east side of El Palenque. The walled-off area appears to be a temple complex, consisting of a main temple flanked by two smaller temple buildings. There are also at least two residences, probably for priests, as well as a number of fireboxes where offerings may have been made.

A view of Structure 20 temple, part of El Palenque's temple, under excavation from its southeastern end. The hearths and burned floor are visible as is the rear staircase being exposed in the right foreground. Image courtesy of Charles Spencer and Elsa Redmond.

The main room of the main temple was scattered with artifacts, including shell, mica and alabaster ornaments, researchers report Monday (April 22) in the journal Proceedings of the National Academy of Sciences. The archaeologists also found ceramic vessels and whistles, as well as incense braziers. Obsidian blades and lances suggest that the priests engaged in ritual bloodletting and animal sacrifice, as did the remains of turkeys, doves and other animals in the temple hearth.

It was in this room that the human tooth and possible human limb bone were discovered, though researchers can't say for certain whether those bones were a sign of human sacrifice at the temple.

The main temple also contained a kitchen much larger than those found in households in El Palenque, suggesting that cooks whipped up meals for large groups in this spot. Behind the temple were several cell-like rooms, perhaps places for priests-in-training or low-ranking priests to sleep. 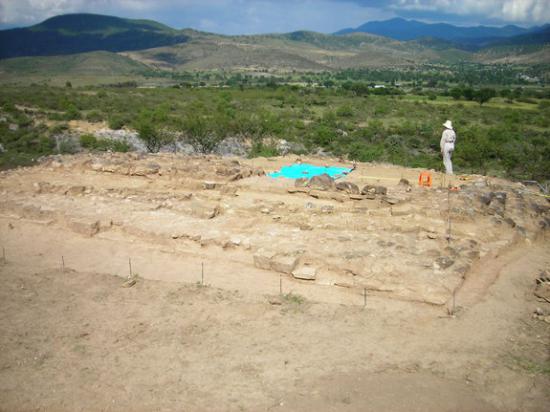 The archaeologists discovered several structures at the early temple precinct, including priestly residences (such as this one called Structure 27 under excavation, facing northeast.) The paved platform at the front of the priestly residence and the paved passageway lead to the sunken room in the rear. The subfloor hearth (Feature 79) and cache (Feature 78) lie under the sheet of plastic. Image courtesy of Charles Spencer and Elsa Redmond.

Also behind the temple, archaeologists turned up two buildings that appear to be priestly residences. These buildings were earthen-floored and thick-walled, with firepits inside that are characteristic of El Palenque homes. Unlike other homes in the city, though, these probably priestly digs revealed few utilitarian jars, griddles and grinding stones — but there were many serving plates. The artifacts suggest that priests didn't cook their own food, but were served meals in their quarters by temple servants or staff.

Like the palace, the temple complex has been burned and appears to have fallen out of use by the end of the first century B.C or the first century A.D., making it the oldest temple discovered yet in the Valley of Oaxaca. Among the remaining mysteries of the site is a hastily buried body found in one of the temple's fireboxes.

According to the researchers, the skeleton was found "in a cramped position that resulted in the skull resting at the firebox's southeast corner and a knee poking about its northwest corner."