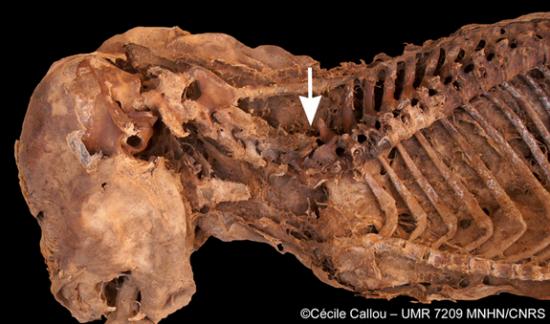 Close-up of the post mortem vertebral dislocation located between the sixth and seventh cervical vertebrae of the mummified dog discovered at the excavation site of El Deir in Egypt. CREDIT: Cecile Callou | UMR 7209 MNHN/CNRS

A dog mummy has revealed the first archaeological evidence of bloodsucking parasites plaguing Fido's ancestors in Egypt during the classical era of Roman rule.

The preserved parasites discovered in the mummified young dog's right ear and coat include the common brown tick and louse fly — tiny nuisances that may have carried diseases leading to the puppy's early demise. French archaeologists found the infested dog mummy while studying hundreds of mummified dogs at the excavation site of El Deir in Egypt, during expeditions in 2010 and 2011.

"Although the presence of parasites, as well as ectoparasite-borne diseases, in ancient times was already suspected from the writings of the major Greek and Latin scholars, these facts were not archaeologically proven until now," said Jean-Bernard Huchet, an archaeoentomologist at the National Museum of Natural History in Paris. [See Photos of Dog Mummy Infested with Parasites]

Mentions of dog pests appear in the writings of ancient Greeks and Romans such as Homer, Aristotle and Pliny the Elder, and a painting of a hyenalike animal in an ancient Egyptian tomb dated to the 15th century B.C. shows what is likely the oldest known depiction of ticks. But evidence of ticks, flies and other ectoparasites that infest the outside of the body has been scarce in the archaeological record — until now. (The only other known archaeological evidence of ticks comes from fossilized human feces in Arizona.) 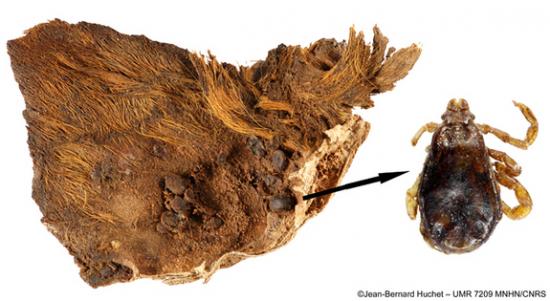 The infested dog mummy was discovered in one of many tombs surrounding a Roman fortress built in the late third century A.D. Most of the main tombs were built during a period dating from the fourth century B.C. to the fourth century A.D. — a treasure trove for archaeologists, despite the condition of many of the mummies. The French team detailed its findings in the August online issue of the International Journal of Paleopathology. 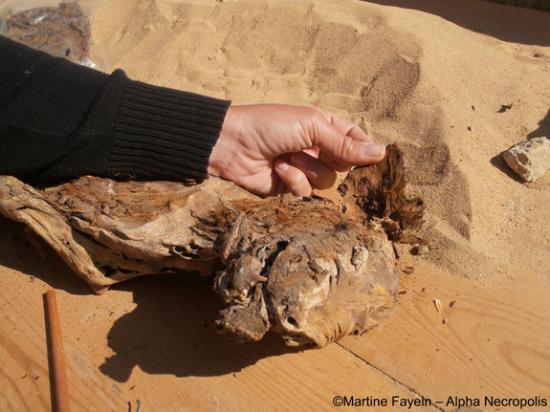 The first evidence of a severe infection by ectoparasites (parasites that live outside the host) revealed by the presence of numerous ticks still firmly anchored in the dog's ear. Credit: Martine Fayein | Alpha Necropolis

Huchet and his colleagues, led by Françoise Dunand and Roger Lichtenberg of the University of Strasbourg in France, found the remains of the parasite-ridden pup among more than 400 dog mummies.

"Among the hundreds of dog mummies studied, [many] of them were either skeletonized or still wrapped with bandages," Huchet told LiveScience. "Moreover, most of the dog remains were seriously damaged by looters."

The infested young pup stood out with 61 preserved brown dog ticks still clinging to its coat and nestled in its left ear. Such ticks have spread worldwide by feeding on domesticated dogs. They can also infect their hosts with a variety of potentially fatal diseases.

"Several reasons have led Egyptians to mummify animals: to eat in the afterlife, to be with pets, etc.," said Cecile Callou, an archaeozoologist at the National Museum of Natural History in Paris. "But above all, animals were considered as living incarnations of divine principles and, therefore, associated with deities."

But many questions remain about the mummified dogs of El Deir. Researchers still want to know where the dogs came from, whether they were domestic dogs, whether they had owners and how they died. Callou pointed out that the ancient Egyptians had cat farms where cats were bred to be sacrificed and mummified — could the same have been true for dogs?

The French archaeologists hope to find answers to a different set of questions by searching for more preserved ticks and flies among the mummified dogs of El Deir. Such archaeological evidence could show how diseases originated throughout history, provide clues about the geographical spread of parasites, and reveal more about the relationship between parasites and both human and animal evolution.

Specialized lab equipment could yield even more findings from the infested dog mummy and its companions. The French team conducted most of its work on-site at El Deir and completed the examination with highly magnified photos at the National Museum of Natural History in Paris but hopes to eventually get permission to take some mummified samples back to the lab.

"The main problem will be to get the authorization to export mummified samples from Egypt for DNA analysis, since this country does not allow any exportation of archaeological material — even tiny samples such as skin fragments and hairs," Huchet said.