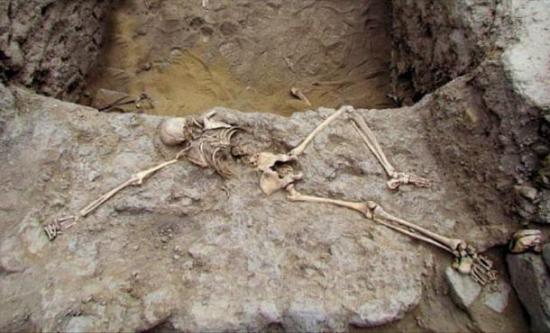 The human sacrifices found in archaeological centers of the Moche culture, extant between the 1st and 8th centuries A.D. on Peru's northern coast, were men and in the supine position. EFE/Andina/Courtesy/Editorial Use Only

The mummified remains of a sacrificed woman of the Moche culture were discovered by Peruvian archaeologists at the El Brujo complex some 570 kilometers (350 miles) north of Lima, researchers said.

The archaeologist in charge of excavating the complex, Regulo Franco, said "it came as quite a surprise to find a woman, and even more to see she was buried in the prone position with her head toward the west in the direction of the sea, and with one of her arms extended, a very abnormal position" because it is unlike any known until now.

The human sacrifices found in archaeological centers of the Moche culture, extant between the 1st and 8th centuries A.D. on Peru's northern coast, were men and in the supine position.

Franco added, in a statement to state news agency Andina, that "we suppose that, after having been sacrificed, her lifeless body was dropped into a previously prepared pit."

The mummified remains were found in the temple of Cao Viejo, which had a ceremonial courtyard over 25 meters (80 feet) high in the El Brujo complex, located in Ascope province of the La Libertad region.

The woman, between 17 and 19 years old, lay beneath the floor of the ceremonial courtyard, constructed toward the end of the Moche occupation of the region, between the 7th and 8th centuries A.D.

America archaeologist John Verano, who works with Franco's team, told local media that the woman's death seems to have been "caused by her swallowing some toxic substance or being strangled with a cord, the usual method with young women who accompanied Moche dignitaries to the tomb."

The El Brujo archaeological complex forms part of a project of the Culture Ministry and the Wiese Foundation for the research and recovery of the heritage of pre-Incan cultures that reached their height in northern Peru.