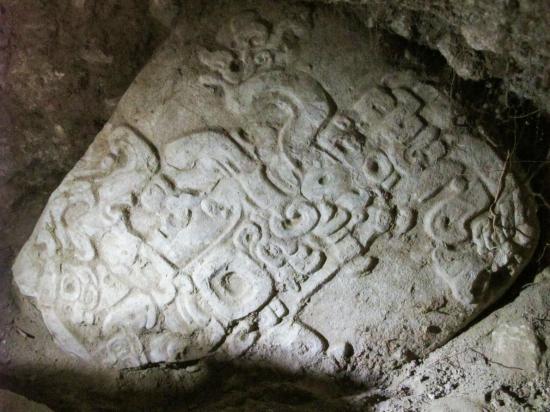 A fragment of a carved stone monument discovered at the Maya site of El Achiotal depicts the face of an ajaw, or vassal lord.

The find of a broken stone monument at the site of El Achiotal in Guatemala’s western Petén may depict a local vassal lord, or ajaw, installed by Siyaj K’ahk’ ("Fire Is Born"), a warrior-ruler from far-off Teotihuacán, near modern Mexico City.

Siyaj K'ahk's forces arrived in the Maya lowlands in 378 A.D., deposing the rulers of the great city-state of Tikal and establishing a new political order across the Maya empire whose legacy remains a topic of debate among modern scholars.

"We were looking for a stairway and digging test units," Auld-Thomas recalls, "when an excavator working on a unit backed out of the hole he had dug and told us he found what looked like a stela."

Stelae are carved stone monuments that are considered a trademark of the later Classic Period (250-950 A.D.).

"We gasped and looked in, and there's the face of a king just staring straight out at us," says Auld-Thomas. "It had been very carefully placed by the ancient Maya so that it was looking out a doorway, like a museum piece in a display case."

"We never expected to find a stela at El Achiotal," says Canuto, who began research there in 2009 with a National Geographic Society/Waitt grant and considered it primarily a Late Preclassic (400 B.C. – 250 A.D.) site.

As archaeologists continued to excavate, they discovered that there were two stelae fragments from the top and bottom of a monument that had been removed from their original location—most likely in front of a temple—and placed in a small shrine surrounded by offerings of ceramics, flints, and human bone. The top fragment of the stela features the partial image of a man holding a serpent bar, a traditional symbol of a ruler.

Maya epigrapher David Stuart of the University of Texas at Austin flew to El Achiotal to decipher the hieroglyphs on the back of the stela. They revealed that it was erected to celebrate the 40th anniversary of an ajaw. Since the stela is incomplete, the name of the ajaw and his leader is unknown.

There was also a date inscribed on the stela, but reading it was "one of the most difficult translation jobs I’ve ever been part of," says Stuart. "The scribes were very tricky and they wrote one of the date elements in a super-ambiguous way."

The anniversary could be associated with one of four potential dates, and Stuart’s most conservative reading—and the one he felt most comfortable with—suggested November 22, 418 A.D.

When Stuart and Canuto counted back 40 years from 418 A.D., they realized that the anniversary would be of an event in 378 A.D. — the notorious year that Siyaj K’ahk’ arrived in the area from the Valley of Mexico, installed new leadership in Tikal under his auspices, and set off a series of changes in the Maya political system that scholars are still trying to understand. 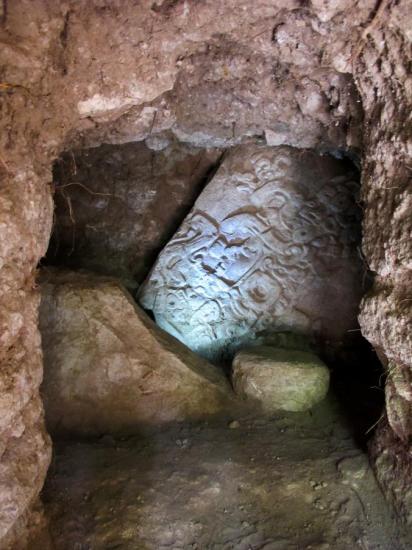 "It's like reading something commemorating a 40-year event after 1776,” says Canuto. "It's a year that everyone would pay attention to."

"We know that when Siyaj K’ahk’ came on the scene in Tikal he was installing subject rulers all around that region," Stuart explains. "We just had no idea that El Achiotal was sucked into this new world order."

Venerated for Centuries in Enemy Territory

The researchers are particularly struck by the fact that, based on the offerings found in the shrine, the stela fragments depicting a vassal lord of Tikal were venerated until around 600 or 650 A.D. Not only is this several generations after the time archaeologists believe El Achiotal was abandoned in the mid-to-late fifth century, but also a period when the region was under the influence of Tikal’s arch-rival, the city-state of Calakmul.

From the sixth century until the end of the Classic period in the late-ninth/early-tenth centuries, these two great Maya "superpowers" waged outright battles and smaller proxy conflicts via their vassal cities in what historians have likened to an ancient "Cold War." To continue the metaphor, venerating a vassal of Tikal in an area controlled by Calakmul might be as if 20th-century Americans were bringing offerings to a bust of Lenin.

While the unexpected discovery sidetracked Auld-Thomas’ plans for the field season, he expects to return to El Achiotal next year to continue his investigation of the Preclassic building.

The Classic-period shrine appears to seal off the stairway he was originally looking for, and the presence of the shrine, as well as burial chambers in the building that were exposed by looters decades earlier, lead the archaeologist to believe the building is of particular importance.

"You always have more questions than answers when you come away from these things, so I'm definitely eager to get back to the site," says Auld-Thomas, who jokingly adds: "I'll probably come down on a Quetzalcoatl temple or something else that will throw everything into further confusion."