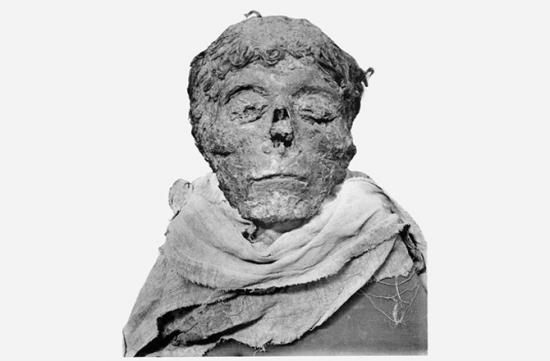 Above is the mummified head of Egyptian pharaoh King Ahmose I, whose parents and grandparents were probably both sets of siblings. WIKIMEDIA COMMONS

The height of the pharaohs who ruled ancient Egypt supports historical records that they might have married their sisters and cousins, says new research into 259 mummies.

It's known from historical sources that incestuous marriages were common among the ancient Egyptian royalty. The pharaohs believed they descended from the gods so inbreeding was seen as a way to retain the sacred bloodline.

But it is hard to prove incest in royal marriages through genetic testings because of ethical consideration when destroying mummies' tissues.

Frank Rühli, director of the Institute of Evolutionary Medicine at the University of Zurich, and colleagues used a highly hereditable character, body height, to look for evidence of incest in 259 mummies of both commoners and royals.

"It is actually one of the largest collections of body height of ancient Egyptians and spans all major periods of their history," Rühli told Discovery News.

The researchers tested the hypothesis of royal incest by studying variation (difference between individuals) of body heights of royals and comparing it with variations among commoners.

"Pharaohs varied less in height than men of the common population. This is one indicator of inbreeding," Rühli said.

Detailing their results in the American Journal of Physical Anthropology, Rühli and colleagues noted that the pharaohs were taller than non-royal males from the same time period, while there was little difference between the stature of queens and common Egyptian women.

Overall, the average height of kings was a steady 166 cm (5.44 feet), featuring much less variations compared to the general population. Queens and princesses averaged 156.7 cm (5.14 feet).

The study also confirmed the highly incestuous levels in the rulers of the 17th and 18th Dynasty, with the 165 cm-tall King Amenhotep I scoring the highest on the incest scale.

He probably was the product of three generations of sibling marriages. In comparison, King Tutankhamun earned a half ranking point.

In the lower range of the scoring system, which researchers admit is rather rough, were pharaohs such as Thutmosis III, whose grandparents were siblings, but not his parents.

Pharaohs who were married to their sisters, but whose parents were not siblings, were not considered since the incest effect would only affect their offspring.

He achieved similar results in a study carried out in Guatemala on living boys and girls between five and 14 years old.