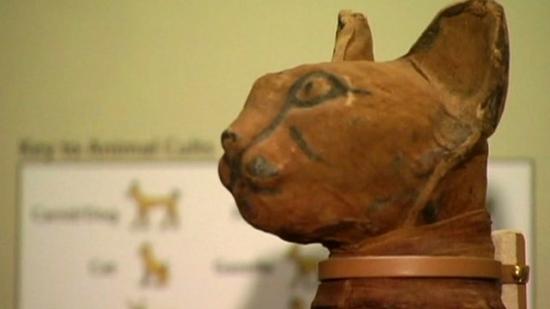 The ancient Egyptian animal mummification industry was so large it put some species in danger of extinction. But as a new exhibit at the Smithsonian Institution's National Museum of Natural History in Washington DC shows, the Egyptians believed they were doing the animals a great honour.

Egypt in the 7th Century BC was not a healthy place to be if you were a cat or a dog.

Puppy farms and other animal breeding programmes were a huge industry - not to produce pets, but to provide a stock of animals to be killed and mummified.

The Egyptians believed that animals held a unique position in the afterlife. They could keep the dead company, they represented the gods, and they were well received as offerings by the gods, Egyptologists say.

Such was the enthusiasm for animal slaughter that experts say it contributed to the extinction in Egypt of at least one bird species. The Sacred Ibis were mummified in the millions because they were sacred to Thoth, the god of wisdom and writing, says Selima Ikram, professor of Egyptology at the American University in Cairo. 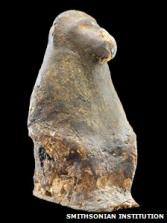 Many baboon mummies were actually forgeries - no animal harmed

Others, including hawks and falcons, saw their populations dwindle.

"It's easier to say which animals the Egyptians didn't mummify," says Prof Ikram, who helped curate the Smithsonian's largest mummy exhibition to date.

"There are no mummified pigs as far as we know, no mummified hippos, and I think that's about it - because almost every other creature at some time or another has been mummified."

At the exhibit, visitors can see a range of mummified animals, including the Sacred Ibis, and gain an insight into the industry that became a driving force of the economy of ancient Egypt.

When animals in the wild started dying out, extensive breeding programmes were launched by the temples and surrounding villages.

The programmes began as early as 3,000BC and peaked from 650BC to 200AD, when the mummification industry was "phenomenally large", says Prof Ikram.

Cats were bred not as pets, but for ritual mummification

"The ancient Egyptians weren't obsessed with death - they were obsessed with life," says Ms Zeder. "And everything they did to prepare for mummification was really looking at life after death and a way of perpetuating oneself forever.

"The priests would sacrifice the animal for you, mummify it and then place it in a catacomb in your name. So this was a way of obtaining good standing in the eyes of whatever god it was."

While many animals were bred specifically to be killed on demand, others were worshiped as deities themselves.

The museum has a rare bull mummy which, as a manifestation of the sun god Re, would have been allowed to live out its life in luxury.

During its life the bull would have received daily massages and paraded through adoring crowds while priests studied its movements and tried to divine messages from the gods.

When the bull died of old age - probably after 20 years - it was mummified, placed in an immense sarcophagus and put into a catacomb.

"Some might have died of heart attacks because they were overfed by the priests," says Prof Ikram.

Other animals did not fare even that well.

Another species killed to the point of extinction in Egypt was the baboon.

When none were left, the Egyptians manufactured fake baboon offerings, creating mummies that looked real on the outside but which CT scans have recently revealed to be elaborate forgeries.

"If you wanted to have a baboon as an offering, you make it look like a baboon - and if you say it is a baboon, then it magically becomes a baboon," says Prof Ikram.

"The real ones were very expensive and hard to come by and that's why the whole genre of fake mummies started."

Animal lovers today might be appalled that such large scale slaughter took place in the name of religion and ritual burials.

But Egyptologists say the ancients believed it was a great honour for the animals involved: They were bred for a higher purpose and would spend eternity with the gods.

"They believed there were going on to a better life," says Prof Ikram, "although their short term life might not have been fantastic."