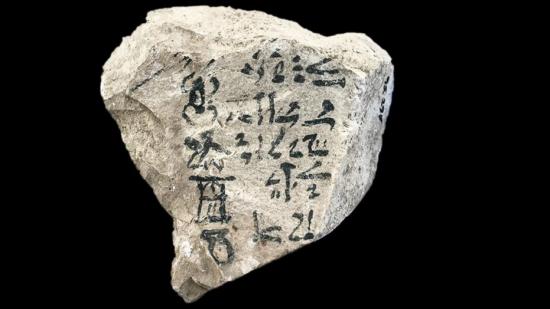 One side of the inscribed 3,400-year-old piece of pottery may show an ancient forerunner to our alphabet sequence. Credit: copyright Nigel Strudwick. No reproduction without permission

The earliest example of our alphabet — a possible mnemonic phrase that helped someone remember "ABCD" — has been discovered on a 3,400-year-old inscribed piece of pottery from ancient Egypt, a scholar believes.

Three of the words start with the ancient equivalent of B, C and D, creating what may be a mnemonic phrase.

Thomas Schneider, a professor of Egyptology and Near Eastern Studies at the University of British Columbia, reported the discovery in a paper published recently in the Bulletin of the American Schools of Oriental Research. This discovery "would be the first historical attestation of 'our' alphabet sequence," he told Live Science in an email.

Modern-day scholars sometimes call the early ancestor of our ABCD alphabet sequence the "abgad" sequence, because this phrase mentions some of the first letters of the early version of our alphabet. Until this discovery, the oldest example of this sequence had only dated back about 3,200 years, Schneider wrote in his paper.

A team of archaeologists from the Cambridge Theban TombsProject discovered the inscribed piece of pottery in 1995 in a tomb that belonged to an Egyptian official named Sennefer, and recently Schneider studied and deciphered it. While the text is written in hieratic — a form of Egyptian hieroglyphic writing — "all [the] words appear to be of foreign linguistic origin" and are mostly Semitic, wrote Schneider in his paper.

There are symbols in front of these three words that are harder to interpret, but they could spell out "elta'at" (a word that can mean "gecko" or "lizard"), Schneider wrote in his paper.

It's possible that all the signs together formed the phrase "and the lizard and the snail, and the dove and the kite …" wrote Schneider in the paper — a phrase that may have helped the person who wrote the text to remember the proper order of the ancient forerunner of today's alphabet.

The other side of the inscribed piece of pottery also contains a series of Semitic words written in hieratic, Schneider said. They spell out the words "hahāna lāwī ḥelpat mayyin leqab." The first letters of the first four words in that series — the letters "hlhm" — represent the first few letters of another ancient alphabetic sequence, one that never became as popular as the ancient forerunner to our alphabet.

These words form a phrase that means, "to make pleasant the one who bends reed, water [according] to the Qab." The "qab" is a unit of measurement that equals about 1.2 liters, Schneider wrote. This phrase likely helped the person who wrote this inscription to remember the first few letters of this alphabetic sequence, Schneider said.

Ben Haring, a senior university lecturer in Egyptology at Leiden University, was the first to recognize the "hlhm" sequence on this pottery piece and published a paper on it in 2015 in the Journal of Near Eastern Studies.

Whoever wrote these inscriptions 3,400 years ago may have been trying to remember the start of both alphabetic sequences, Schneider said. Sennefer was an official who dealt with Egyptian foreign affairs and likely understood the Semitic languages that were used in the Eastern Mediterranean, Schneider said.

When Sennefer's tomb was being constructed, perhaps the scribes helping to build the tomb were trying to learn the languages, and one of them wrote these words down as a practice exercise, Schneider told Live Science.

Schneider's article was recently published, and it remains to be seen how scholars will react to his findings.

Haring, who identified the "hlhm" sequence, said that he welcomes Schneider's work, but is cautious about the idea that the other side of the pottery piece bears evidence of the ancient forerunner to our modern alphabet sequence. A major problem with research into this piece of pottery is the lack of texts written in Semitic dating back 3,400 years, Haring said. This means that when scholars analyze the words, they have to use Semitic texts from later periods to understand them, even though their meanings could have been different 3,400 years ago, Haring said.

When Haring published his "hlhm" finding in 2015, he published it as a suggestion — even he wasn’t convinced of his own discovery at the time. He said that since that time, his finding has received widespread acceptance among scholars. It remains to be seen if Schneider's finding will receive the same acceptance.