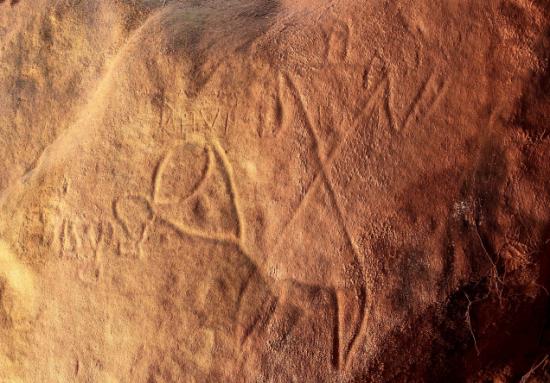 The pre-historic anthropomorphic figure, with the Tamil-Brahmi inscription reading 'Sri Vazhumi' (on the figure's right side) found engraved on the Edakal cave in Kerala. 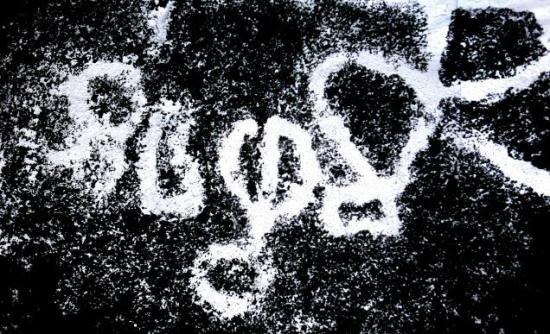 THE HINDU  - The estampage of the inscription.

M.R. Raghava Varier, retired Professor of Epigraphy, Calicut University, who made the latest discovery, has read the record as ‘Sri Vazhumi.' An estampage of the inscription was made by K. Krishnaraj, designer in the Kerala State Department of Archaeology.

In Dr. Varier's interpretation, the inscription appears to be a label attached to a human figure, engraved exactly in the Edakal style of drawing. The figure is shown as having a big phallus, probably denoting fertility, and suggesting Brahma, the Creator himself.

The term, ‘Vazhumi,' could be the Tamil rendering of the Sanskrit name, Brahma, said Dr. Varier, now Editor of Kerala Archaeological Series, a publication of the Department of Archaeology.

The letter ‘zhu' is written in the Tamil-Brahmi script, and the rest of the letters take the forms of the northern variety of the alphabet. The cursive letter ‘zha' represents a later stage of evolution.

Epigraphist Iravatham Mahadevan termed the latest find “an important discovery.” “There is no doubt that the language is Tamil, and the script is Tamil-Brahmi because of the occurrence of the unique letter ‘zha'.” Going by the palaeographic evidence, he estimated that the inscription belonged to the fourth century C.E.

Mr. Mahadevan, however, read the script as ‘pazhama,' meaning antique or ancient. The script might be a later inscription, describing the much earlier rock carving found in the caves, but “I would like to emphasise that this is only a provisional reading… We should await a fuller report from Mr. Raghava Varier… I am not sure what the first letter is, but it is a genuine discovery.”

This marvellous treasure of rock art and Tamil-Brahmi inscriptions, Dr. Varier said, was first reported in 1901 by F. Fawcett, the then Superintendent of Police of the erstwhile Malabar district, in Indian Antiquary, a government of India publication. In his article, Fawcett gave a vivid account of the engravings on the walls of the cave. He also gave the facsimiles of the inscriptions he had noted, with their readings supplied by E. Hultzch, the government epigraphist of the Madras Presidency.

Inscriptions in the southern and northern varieties of Brahmi had already been reported from the period of Fawecett himself. But the present one was different from those: it appeared to be a label attached to an anthropomorphic figure, while all the previous writings were at a distance from the rock carvings without any reference to them, Dr. Varier said.

“The newly found record is important in several ways,” he stressed. First, it supplied a document with a piece of content different from those of the other records at the site. Other records invariably contained the names of rulers and heroes, while the latest refers to the name of a deity, most probably a god of fertility. Second, the label, ‘Sri Vazhumi,' offered proof of some connection between the rock art tradition of Edakal and the Brahmi writing in south India. “However, one does not know whether the label was attached to the [anthropomorphic] figure at the time of the drawing or at a later stage,” Dr. Varier said.

Third, the text as a whole denoted a merger of the Sanskrit and the Dravidian languages and their scripts, as well as the religious ideas, he claimed. “Finally and more importantly, this record with a reference to its period can function as a specific horizon to interpret many a carving on the cave walls of Edakal.”

The Edakal caves are famous for their rich rock art and inscriptions couched in the Brahmi characters, the earliest extant writing in south India. The caves are on the Ambukuthi hill, to the east of Ambalavayal bazaar in Ambalavayal taluk.

V. Vedachalam, retired Senior Epigraphist of the Tamil Nadu Archaeology Department, also read the script as ‘vazhumi' and said the first letter preceding the word ‘vazhumi' was not legible.

While Dr. Varier estimated that the script belonged to the third-fourth century C.E., Dr. Vedachalam dated it to the fifth-sixth century C.E. when the Brahmi script was in the process of being transformed into Vattezhuthu and Tamil.