East St.Louis site (USA) : Where did the Mississipians go ? And why ? Part.2

For residents of Southern and central Illinois, the ancient Mississippians represent a presence that turns up in daily life, from the "birdman" symbol etched into state highway overpasses to the term "Cahokia."

But what is still unknown is: Where did they come from, and what happened to them? Did they die off or did they become the "Indians" of more modern times?

The small army of diggers has been working since 2008 to finish this excavation by the end of the year. This area, once home to 3,000 people who lived 500 years before Columbus, lies in the path of the New Mississippi River Bridge Project and must be excavated or lost to bulldozers. Less than a mile away near St. Clair Avenue, construction crews are already repaving roads that will lead to the bridge. 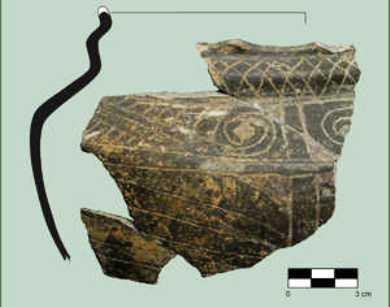 A jar rim from a vessel common to the Northern Plains but uncommon at a Mississippian site in this area. - Provided/BND

For archaeologists, this location is significant because it would have been the first habitation seen by visitors in prehistoric times to this region as they cruised down a much wider and shallower Mississippi in dugout canoes. The village would have been in the path of native people headed for the Cahokia Mounds ritual center 5 miles further inland.

Durst speculated that from the river, the village would have been an awesome sight easily visible because the years of habitation would have deforested the slope leading from the beach. Hundreds of smoke plumes from campfires would have filled the horizon. And marker poles, which were tree trunks set upright in the ground and possibly containing forbidding carvings of gods or animals, warned visitors that they were entering a place where highly civilized people ruled.

Artifacts usually found in other states, including pieces of finely decorated pottery from Arkansas, Missouri and Iowa and beads carved from shells from the Gulf of Mexico, are being found almost daily. These discoveries support a long-held theory that the entire Cahokia area was the center of a culture that built mounds throughout the Midwest and southeastern United States.

A 6-inch high stone statue of a kneeling woman holding a conch shell was found last year. It is believed to be one of only a few that are known to exist.

Durst said that the sheer amount of data being collected all from one place is likely to lead to answers to basic questions about the Mississippians.

A smaller, but very artifact-rich, nearby site just east of Brooklyn called "Janey B. Goode," was excavated a few years ago. Durst said that it contained about 800 features. A feature can be the remains of a dwelling or communal structure, a waste pit, fireplace or hearth or the dark stains in the earth where large, log-like poles were placed upright in the ground. 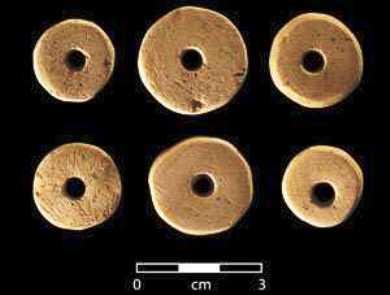 Shell beads made from large conch shells found along the Gulf Coast and often fashioned into necklaces believed to have been worn by elite member of Cahokian society. - Provided/BND

But the larger East St. Louis site has more than 2,500 features, including the remains of 500 dwellings, although that many more ancient homesites might remain buried, he said.

"How and when this urban commercial and ritual center all came together and what caused it to fall apart is what we want to answer," said Brad Koldehoff, an archaeologist and cultural resources director for the Illinois Department of Transportation. The dig is a joint effort by the Illinois State Archaeological Survey and IDOT.

Koldehoff said that the village's abandonment might have been a result of over exploitation of animals and plants. While the Mississippians depended on fishing and growing a primitive type of corn and other vegetables, like squash and beans, they needed firewood and meat from game animals to augment their diet.

"Staying in one place too long almost sets you up to fail," Koldehoff said.

"There is always the environmental factor," said Durst. "This is in a flood plain. There might have been an extended flood or a drought. Agriculture failed and they could no longer sustain a population. And there are also the more extreme views including that it was warfare. We do have a number of burned houses here. We don't know if they're burning them intentionally as a kind of ceremonial abandonment or potentially people are attacking the area."

The evidence turns up through careful digging. And even though a deadline is fast approaching, each feature is sketched on graph paper for later study in the lab.

Digger Justin Wallace, of Millstadt, said the atmosphere at the East St. Louis site is one of high enthusiasm.

"As far as the Cahokia culture in this area, this is one of the biggest things that's ever been done," he said.

"We're getting more information now really, than we been able to get from Cahokia Mounds. This was a mecca. All the waterways coming together here. The fertile soil."

August Traeger, an excavator from St. Louis, said, "This is a rare opportunity to get this kind of information because over in St. Louis it was just covered up and lost."

For archaeologist Douglas Jackson, who helps supervise the dig, finding artifacts like carved shell beads means an opportunity to find out about the elite or the rulers of the village society.

"When we start seeing these exotic items. Would the average Joe get the access to these items?" Jackson asked. "Or would it be somebody who is in charge, the elite or whatever? That's what makes it so interesting."