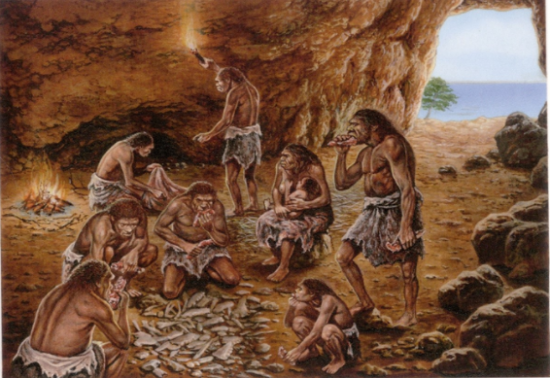 Reconstruction of ancient human in the Lazaret Cave, France (Pay attention to the location of the hearth).

Findings indicate that early humans knew a great deal about spatial planning: they controlled fire and used it for various needs and placed their hearth at the optimal location in the cave – to obtain maximum benefit while exposed to a minimum amount of unhealthy smoke.

A groundbreaking study in prehistoric archaeology at Tel Aviv University provides evidence for high cognitive abilities in early humans who lived 170,000 years ago. In a first-of-its kind study, the researchers developed a software-based smoke dispersal simulation model and applied it to a known prehistoric site. They discovered that the early humans who occupied the cave had placed their hearth at the optimal location – enabling maximum utilization of the fire for their activities and needs while exposing them to a minimal amount of smoke.

The study was led by PhD student Yafit Kedar, and Prof. Ran Barkai from the Jacob M. Alkow Department of Archaeology and Ancient Near Eastern Cultures at TAU, together with Dr. Gil Kedar. The paper was published in Scientific Reports.

Yafit Kedar explains that the use of fire by early humans has been widely debated by researchers for many years, regarding questions such as: At what point in their evolution did humans learn how to control fire and ignite it at will? When did they begin to use it on a daily basis? Did they use the inner space of the cave efficiently in relation to the fire? While all researchers agree that modern humans were capable of all these things, the dispute continues about the skills and abilities of earlier types of humans.

Yafit Kedar: "One focal issue in the debate is the location of hearths in caves occupied by early humans for long periods of time. Multilayered hearths have been found in many caves, indicating that fires had been lit at the same spot over many years. In previous studies, using a software-based model of air circulation in caves, along with a simulator of smoke dispersal in a closed space, we found that the optimal location for minimal smoke exposure in the winter was at the back of the cave. The least favorable location was the cave's entrance."

In the current study the researchers applied their smoke dispersal model to an extensively studied prehistoric site - the Lazaret Cave in southeastern France, inhabited by early humans around 170-150 thousand years ago. Yafit Kedar: "According to our model, based on previous studies, placing the hearth at the back of the cave would have reduced smoke density to a minimum, allowing the smoke to circulate out of the cave right next to the ceiling. But in the archaeological layers we examined, the hearth was located at the center of the cave. We tried to understand why the occupants had chosen this spot, and whether smoke dispersal had been a significant consideration in the cave's spatial division into activity areas."

To answer these questions, the researchers performed a range of smoke dispersal simulations for 16 hypothetical hearth locations inside the 290sqm cave. For each hypothetical hearth they analyzed smoke density throughout the cave using thousands of simulated sensors placed 50cm apart from the floor to the height of 1.5m.

To understand the health implications of smoke exposure, measurements were compared with the average smoke exposure recommendations of the World Health Organization. In this way four activity zones were mapped in the cave for each hearth: a red zone which is essentially out of bounds due to high smoke density; a yellow area suitable for short-term occupation of several minutes; a green area suitable for long-term occupation of several hours or days; and a blue area which is essentially smoke-free.

Yafit and Gil Kedar: "We found that the average smoke density, based on measuring the number of particles per spatial unit, is in fact minimal when the hearth is located at the back of the cave – just as our model had predicted. But we also discovered that in this situation, the area with low smoke density, most suitable for prolonged activity, is relatively distant from the hearth itself.

Early humans needed a balance – a hearth close to which they could work, cook, eat, sleep, get together, warm themselves, etc. while exposed to a minimum amount of smoke. Ultimately, when all needs are taken into consideration – daily activities vs. the damages of smoke exposure – the occupants placed their hearth at the optimal spot in the cave."

The study identified a 25sqm area in the cave which would be optimal for locating the hearth in order to enjoy its benefits while avoiding too much exposure to smoke. Astonishingly, in the several layers examined by in this study, the early humans actually did place their hearth within this area.

Prof. Barkai concludes: "Our study shows that early humans were able, with no sensors or simulators, to choose the perfect location for their hearth and manage the cave's space as early as 170,000 years ago – long before the advent of modern humans in Europe. This ability reflects ingenuity, experience, and planned action, as well as awareness of the health damage caused by smoke exposure. In addition, the simulation model we developed can assist archaeologists excavating new sites, enabling them to look for hearths and activity areas at their optimal locations."

In further studies the researchers intend to use their model to investigate the influence of different fuels on smoke dispersal, use of the cave with an active hearth at different times of year, use of several hearths simultaneously, and other relevant issues.