Early human dispersal into Spain through Strait of Gibraltar

Most recent dating places one wave of human dispersal out of Africa into southeastern Spain at almost one million years ago. 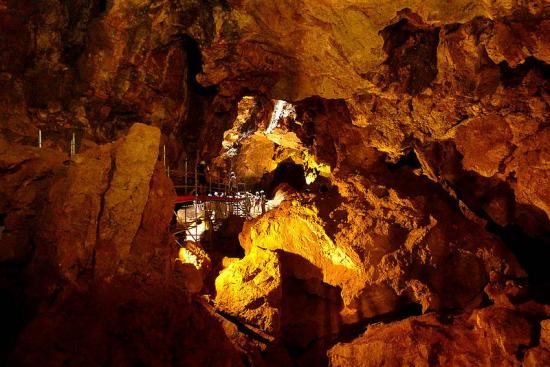 Using state-of-the-art dating methodologies, a team of scientists have obtained or confirmed a date range between .9 and .85 Mya (million years ago) as a time when a species of Old World monkey (Theropithecus) and an early species of human occupied the cave site of Cueva Victoria in southeastern Spain. It is a location not far from where many scientists have hypothesized that humans may have crossed over into Europe from North Africa through the Strait of Gibraltar at a time when seal levels were low enough to provide a land bridge between the two continents.

Using paleomagnetism, uranium-thorium, and vertebrate biostratigraphy dating techniques, Luis Gibert of the University of Barcelona, Spain, and colleagues from several other institutions conducted testing on fossiliferous breccia samples and other deposit samples from the cave. Their results showed that the fossil evidence for the Theropithecus presence was constrained to a range between .9 and .85 Mya. Similar dates have been obtained through previous studies on the Cueva Negra cave in the same region of Spain, which contained evidence of early human (Homo) fossils associated with what is arguably considered to be the earliest Acheulean-type stone tools in Europe.

The authors of the study suggest that the presence of the same species of Theropithecus, including Homo, at about the same time in North Africa, coupled with the absence of Theropithecus fossils elsewhere in Europe, supports the hypothesis of a dispersal of the two primates (Theropithecus and Homo) through the Strait of Gibraltar almost 1 million years ago. During this time, sea levels were low enough to create a land bridge at the Strait between Africa and Europe.

Previous studies by other teams have also suggested another, earlier human dispersal into southeastern Spain through the Strait of Gibraltar at about 1.3 million years ago, and the famous research and Homo fossil discoveries at Dmanisi in Georgia have suggested an even earlier Homo dispersal out of Africa, possibly through the Levant and up through Anatolia to the southern Caucasus at around 1.8 million years ago.

The study* is published in press in the Journal of Human Evolution.