Archaeologists have uncovered grim evidence of a centuries-old mass grave next to Durham Cathedral.

Experts from Durham University carrying out digs on the city’s World Heritage Site have discovered the remains of many more human bodies.

Digs earlier this month found four bodies - a figure which has now risen to 18. 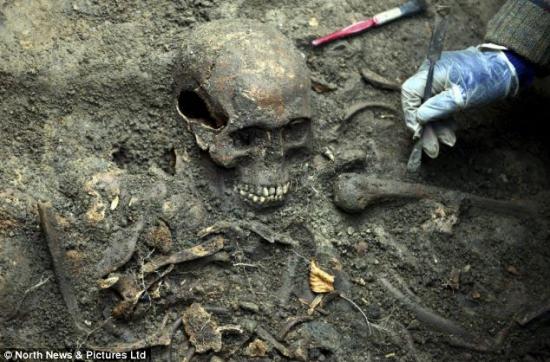 Newly discovered human remains at the Durham site brings the total of skeletons found to 18 individuals. At first archaeologists believed the remains were overflow from the cathedral's cemetery, but the way the bodies were arranged reveals an unusual form of burial

The team members first thought they had uncovered remains of Durham Cathedral’s medieval cemetery, the boundaries of which may have extended further than the present day burial site.

But the newly-discovered corpses had been tipped into the earth without elaborate ceremony, suggesting they part of a mass burial.

Richard Annis, senior archaeologist with Archaeological Services Durham University, said: 'We have found clear evidence of a mass burial and not a normal group of graves.

'One of the densest areas of the excavation was further north, which is further away from the edge of the presumed graveyard. 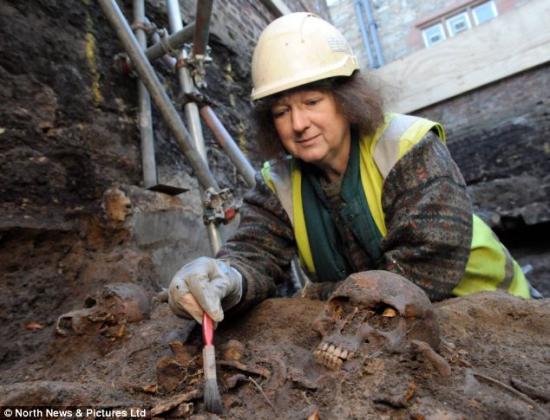 Durham University will carry out further research into the remains, which will include dating the bones and looking for clues as to their origin. This work is expected to begin in the New Year (archaeologist Janet Beveridge, pictured)

'The bodies have been tipped into the earth without elaborate ceremony and they are tightly packed together and jumbled.

'Some are buried in a North-to-South alignment, rather than the traditional East-to-West alignment that we would expect from a conventional medieval burial site.' 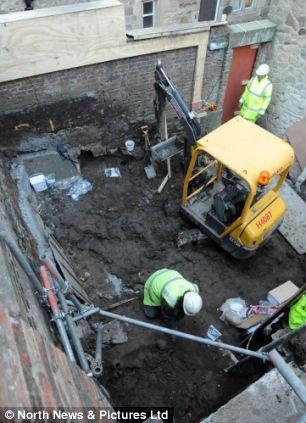 The same Durham University team will carry out further research into the remains, which will include dating the bones and looking for clues as to their origin. This work is expected to begin in the New Year.

Mr Annis added that no definitive interpretation could be offered at this stage in the investigation.

He said: 'The process of post-excavation processing, examination and analysis is essential to allow us to draw proper conclusions about this group of human remains.

'It is too early to say what they may be.'

The first evidence of human remains was found earlier in November during building work at the University’s Palace Green Library.

With the necessary permission from the UK’s Ministry of Justice, archaeologists are carrying out excavation works in the area before taking the bones away for further examination.

By law, the bones must eventually be reinterred at an approved burial ground.