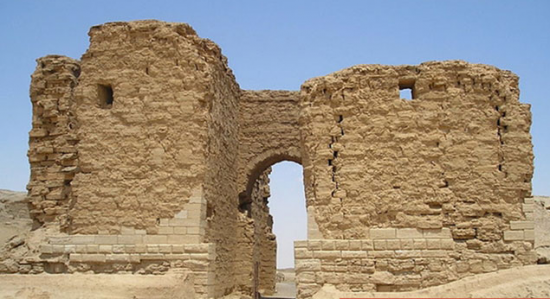 At the Palmyrene Gate, the principal entrance to the city of Dura Europos, toxic gas brought death more than 1,700 years ago. Credit: Heretiq/Wikimedia Commons

If Syrian President Bashar al-Assad has really carried out a chemical attack, it wouldn’t be the first time poisonous gas brought death in the Middle East country.

Indeed, right in Syria archaeologists have found some of the oldest evidence of chemical warfare.

According to University of Leicester archaeologist Simon James, who published his findings back in 2009, poison gas was used in Syria more than 1,700 years ago when a Roman fort at Dura-Europos became the site of a violent siege by the powerful Sasanian Persian empire.

No historical record exists of the battle, which occurred around 256 A.D., but archaeological remains, unearthed by major excavations in 1920-1937 by teams from France and Yale University, and after 1986 by French-Syrian teams, helped James piece together the action.

Trying to enter the city, the Sasanians dug tunnels underneath its walls. Intending to hold their ground at all costs, Roman defenders responded with counter-mines.

In the 1930s, archaeologists unearthed dramatic evidence of the fight. In one of the tunnels, a pile of bodies, still completely fitted with their weapons and armour, testified to the horrors of the battle.

At the time, the researchers believed the trapped Roman soldiers had died after the tunnel collapsed. But according to James, residue of pitch (a resinous substance) and yellow sulfur crystals found in a jar lying near the bodies indicated a much more gruesome reality.

Indeed, the Sasanians placed fire pits strategically throughout the tunnel, and when the Romans broke through, they gassed them by adding sulfur crystals and bitumen to the fire.

“Defining what constitutes a chemical weapon in antiquity is complex, but this is certainly one of the earliest archaeological finds of the addition of chemical accelerants to a fire to produce toxic fumes,” Adrienne Mayor, a research scholar in classics and history of science at Stanford University, told Discovery News.

Mayor described the skirmish in the tunnel and the presence of burnt residue as an early example of archaeological evidence for a chemical incendiary in her 2003 book “Greek Fire, Poison, Arrows and Scorpion Bombs.”

According to the scholar, a possible contender for the earliest archaeological evidence for a chemical weapon is a charred, manmade fire ball from the archaeological battle site at Gandhara, Pakistan.

“The burning missile had been hurled at Alexander’s besieging army in 327 BC. Chemical analysis revealed the ball’s composition included sulfur, barite, and pitch,” Mayor said.

The ball was certainly ignited in a fire, but whether this was deliberate or accidental is impossible to establish.

Long before World War I, when 39 different toxic agents — ranging from simple tear gas to mustard gas — were extensively used, it was a mixture of sulfur and pitch that gassed enemies.

Greek historian and Athenian general Thucydides described how, during the Peloponnesian War, the Spartans created a sulfur and pitch (in this case pine resin) fire at the siege of Plateia, Greece, in 429 BC.

The Boeotians, Sparta’s allies, used a similar chemical flame-thrower in 424 BC at Delium, combining burning coal, sulfur and pitch.

Aeneas Tacticus (360 B.C.), one of the earliest Greek writers on the art of war, suggested combining pitch and sulfur to defend against sieges.

“These are the earliest recorded uses of a chemically enhanced incendiary to create a poison gas,” Mayor said.

“The combustion of sulfur creates toxic sulfur dioxide gas. The fumes are lethal if inhaled in large quantities,” she added.