Water has for thousands of years directed the currents of development in Gansu province's Dunhuang city - the only desert oasis for hundreds of kilometers in any direction as the camel trots. 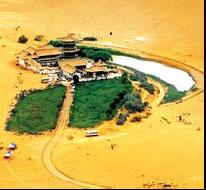 The Crescent Moon Lake looks like a mirage in the desert. (Cao Zhizheng / Asia News Photo)

The centerpiece of the city's water table is Crescent Moon Lake, a bowed aquatic sliver shimmering in the cracks of several tumbling dunes.

This water sickle's edges are fleeced by greenery, beyond which the stark yellow sands of the Gobi desert mash together in dunes that roll for about 200 km to the south. Surely, the island of lushness seems so surreally out of place in the otherwise barren wastelands that it appears as if it were a mirage.

The topography of this parched landscape is shaped like the backs of the camels that plod across its slopes. Visitors can explore the swooping sand drifts while seated between these creatures' joggling humps.

And it's this very topography that has protected the lake from being swallowed by the area's frequent sandstorms. The roaring winds - from which the Resonating Sand Mountain (Mingshashan) takes its name - always blow east to west and from peak to peak across the dunes. This sends an aerosol of sand flying over, rather than into, the water.

But while the Crescent Moon Lake isn't in danger of being filled in from above, it is being sucked out from underneath. Dunhuang's groundwater - fed by about 20 minutes of rain a year - has become an even scarcer resource as the city's thirst for development continues to rapidly sponge it up. Over the past several decades, this has caused the pool to shrink into a puddle of its former self.

However, the Crescent Moon Lake's waning may be averted by ongoing city government campaigns to cap Dunhuang's population at 800,000 in the greater area, and to prohibit the drilling of new wells and cultivation of new land.

Despite its small size, the lake remains a big attraction for visitors.

Unlike the Silk Road-era travelers who came to the watering hole to quench their physical thirst, contemporary tourists come to drink in the scenery.

But liquid refreshment is still available - this oasis has its own drink stand, a pagoda proffering boiled apricot juice, a local specialty favored by locals for its hydrating qualities.

And visitors will not want to be parched while slogging up the dunes rising from the lake. It's a tough climb to the top, as every step buries climbers' legs up to their shins in sand. Vendors near the base rent out neon-orange, knee-high cloth booties that - in addition to making a fashion statement, of some kind - keep the desert out of wearers' shoes.

But while the distances up and down the sand piles are equal, the return trip is made much faster by "sand sledding". Visitors can hop aboard a bamboo toboggan and whoosh down the declivity, spraying rooster tails of dust behind them.

Whether by sled, foot or camelback - or by all three - exploring this oasis is a must for any traveler to Dunhuang.

As a fountainhead of scenic beauty and historical culture, Crescent Moon Lake shines bright as a star attraction for visitors to Gansu's otherwise desolate deserts.

Gansu province's Dunhuang is hoping to restore its glory days by reconstructing its ancient city - and will do so by following the dynastic-era blueprints from the secret library a mysterious monk hid in a cave in 1035, the local government says.

"We're looking to create a theme park that is also a way of living," he says.

"It's not difficult to recreate the ancient structures. The trickier part is recreating a lifestyle - to build a place where you walk through the gate and into the Han Dynasty (206 BC-AD 220)."

To this end, planners are considering having visitors exchange their modern money for ancient coins and swap their contemporary clothing for Han-era attire upon entering the city.

Jao says he took inspiration for the concept from the modern US tradition of the toga party, in which revelers dress in ancient Roman robes.

"I want to have a Chinese toga party, and everyone's invited," Jao says.

The project will cover one-seventh of the 7-sq-km city of 5,000 residents. It will cost 3 billion yuan ($451 million) and take five years to complete, Dunhuang's planning commissioner Qi Xingji says.

To figure out how best to do that, J.A.O. Design distributed more than 500 surveys to locals and visitors.

The hope, the city's Party Chairman Sun Yulong says, is to create stronger staying power for tours to the Dunhuang Grottos, Crescent Moon Lake and the westernmost terminus of the Han Great Wall. Visits currently last for an average of two days.

"It will make a huge difference to the prosperity of our city if we can get people to stay another day or two," Sun says.

"And this ancient city reconstruction project is our best option for making this happen."

Tourism is Dunhuang's No 1 industry, accounting for about 30 percent of the local economy, government figures show.

The rebuilding project's design is based on the ancient urban planning documents discovered in 1900 in the secret library of Hong Bian. For reasons still unknown, the monk stashed the records, behind a fake wall in the Dunhuang Grottos' Cave No 17, almost 1,000 years ago.

The reconstructed city will contain six zones, Qi says. There will be a Buddhist monastery area; a museum and international exhibition area; a hotel, guesthouse and service area; a commercial and trade area; a performance area dedicated to local traditions; and a central district industry park.

Sun says he hopes the new attraction would lure not only domestic but also foreign tourists.

"Dunhuang is the central meeting point of China and Central Asia," Jao says.

"We're trying to recreate the 36 lifestyles of the 36 nations that once converged here. This historical fusion of cultures must be recreated."

During the Han and Tang (AD 618-907) dynasties, the city was the only oasis in the desert swath between Central Asia and the ancient capital Xi'an (then called Chang'an). The Silk Road nexus also hosted the largest proportion of foreign residents in China.

"If China wants to influence the world again, the cultures have to meet," Jao says.

"And there's no better place for this than Dunhuang."