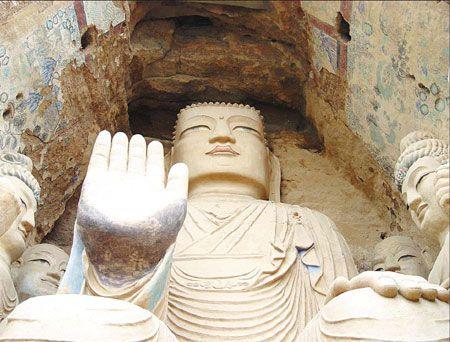 The Dunhuang Grottos are a treasure trove with more than 2,000 statues and 45 sq km of murals, dating back to about 1,000 years ago. (Cao Zhizheng / Asia News Photo) 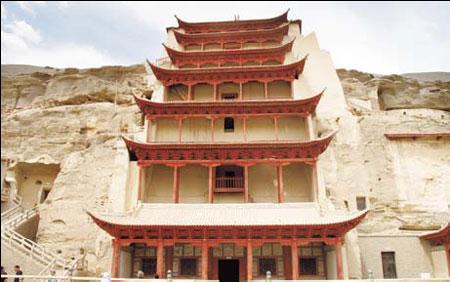 A trip through Gansu province's Dunhuang Grottos is a journey not only back in, but also across time.

Visiting these caves offers an archeological adventure in what could be the set for an Indiana Jones film - replete with hidden passages, secret texts and tales of gold thieves - that provides insight into the cosmopolitan evolution of this ancient Silk Road nexus.

That's because the honeycomb of cavities that pock the cliff in front of the Resonating Sand Mountain in modern Gansu province was whittled over a millennium - meaning the caves were, in the truest sense, shaped by the eras during which they were excavated and renovated.

The chambers became unintended time capsules of Northwest China's historical development from the moment the first chisel was set against the crag's sandstone exterior in AD 366. 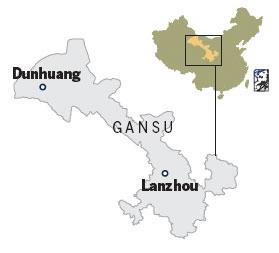 According to legend, that was the year monk Yue Zong sat baking in the searing desert sun on a riverbank in front of the mountain, admiring the landscape's exceptional feng shui. As dusk began to ink out the skyline, he decided to dig out a dwelling at the point beneath where the sinking sun touched down on the cliff's crest.

In the solar-heated oven that was Northwest China's ancient desert, a hole in the wall - or a cavern in a rock face - was prime real estate.

The realty's desirability enticed others to copy Yue's idea over the following centuries, and by the 1400s, the crag was whittled into a compound of 735 grottos. For generations, these chambers would be cohabited by a cast of wealthy nobles, monks, artisans, war refugees and stone Buddhist deities.

Their legacies are preserved in the more than 2,000 statues and 45 sq km of murals that have survived until today.

And the 30 caverns that are open to the public reveal a cross section of the millennia that transpired since Yue Zong watched that sunset above the Resonating Sand Mountain.

The roof of the seven-story tower built to cover the expanse housing the statue was reconstructed from 1928-1935, and new steps were added between 1963 and 1987.

While the body of the grottos' second-biggest Buddha - a 26-meter-high Tang Dynasty stone sculpture - is entirely original aside from its belt and right hand (scholars call the left "the most beautiful hand in all of China"), the rest of Cave No 130 was adorned during different periods. The murals on the wall were painted during the early and late Tang, and Song (960-1279) dynasties, while the tiling came from the Song and Jin (1115-1234) eras.

Those familiar with Chinese art history - and those hoping to become so - will appreciate the distinctive styles of the different eras evident in the caves' adornments.

The cavern for the 15-meter-long reclining Buddha in No 148, built by the devout Li family in AD 776, was chiseled to have an arch-shaped ceiling resembling the ancient coffins of the time. And the faces on the women figurines found in No 217 float atop double chins, as a portly figure was considered beautiful in the prosperous Tang Dynasty.

No 419 is home to a 1,000-handed Buddha popular during the Sui Dynasty (AD 581-618), when Buddhism flourished in the country, whereas No 275 contains a 3.4-meter-high cross-legged pusu (humbly dressed) Buddha rendered according to the style of the Three Kingdoms (AD 220-280) period when it was carved.

In addition to showcasing the development of dynastic China, the dens that dimple the Resonating Sand Mountain also reveal the histories of the 36 nations that once traveled to, and lived and traded in, this Silk Road commercial hub.

The Western Wei Dynasty (AD 535-556) paintings and Qing-era statues in Cave No 249 show Indians intermingling with local ethnic groups, while Buddha is clad in a Greek robe and stands next to a Hindu god with 13 heads and a snake body.

And the Sui Dynasty Buddhas in No 292 are clad in ancient Persian attire colored with Afghan pigments - worth more than gold at that time. Gold, too, was used in this cavern's artwork but was long ago stripped away by burglars.

But the real hidden gem taken from the grottos' treasure trove was the secret library of Cave No 17.

Foreigners raided the collection of more than 40,000 writings and artworks, which span several centuries and languages, in 1900 - the year the collection was discovered behind a secret door built into the cavern wall about nine centuries earlier. About 10,000 of the artifacts are still in China, while most of the rest are in Japan, Russia and the United States.

To this day, nobody knows why monk Hong Bian - whose ashes are mixed into a statue of his likeness in the cave - stashed these masterpieces in the hidden compartment around AD 1035. Most experts theorize it was to protect the ephemera from the impending Xixia King's invasion. If that's the case, it worked, but Hong likely had little inkling foreigners would eventually seize the works almost a millennium later.

But even with the library gone, the wealth of historical riches found in the Dunhuang Grottos make them an archeological Aladdin's cave (the story is actually set in an unnamed Chinese desert city rather than the Middle East).

So visitors to these cliff-side caverns can discover Northwest China's past and present shaped both by, and in, the sands of time.