Did the Portuguese discover Australia? 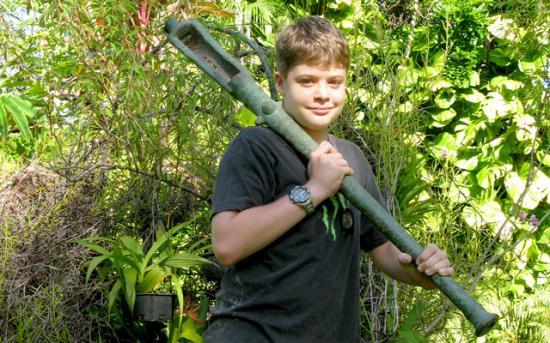 The gun was found off Dundee Beach.

An antique gun found buried on a Northern Territory beach may support theories the Portuguese were the first European power to discover Australia, an historical author says.

Christopher Doukas unearthed the gun buried in mud off Dundee Beach, about two hours' drive from Darwin, during a low tide in January 2010.

The Doukas family did some internet research and found it resembled a 16th Century Portuguese swivel gun.

Darwin Museum has now asked to see the item and the family will hand it over for analysis when they return from holidays later this month. 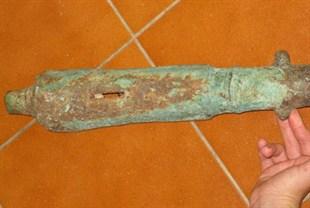 Canberra-based author Peter Trickett told ninemsn the gun, if authentic, may have been dumped during one of two voyages he claims Portuguese seafarer Cristovao de Mendonca made around the coast of Australia in 1521 and 1522.

"I have no doubt the Portuguese went as far as Darwin, so finding a gun off a beach near Darwin wouldn't surprise me at all," he said.

"How it got there exactly … whether it was dropped overboard or maybe there was some conflict with local Aborigines … is a matter of speculation."

Tests are yet to confirm the origins of the gun, however, and some say it may have been left there by antique dealers in the 1800s.

Portugal occupied Timor from 1515 until 1975, but it is hotly debated whether Portuguese explorers made it to Australia, about 700km away.

Theories of Portuguese discovery, outlined in Mr Trickett's 2007 book Beyond Capricorn but first advanced by historians in the late 1970s, rely on evidence of other antiquities found on Australia's coastline as well as maps the Portuguese supposedly made in secret well before Dutch navigator Willem Janszoon set foot on Cape York in 1606. 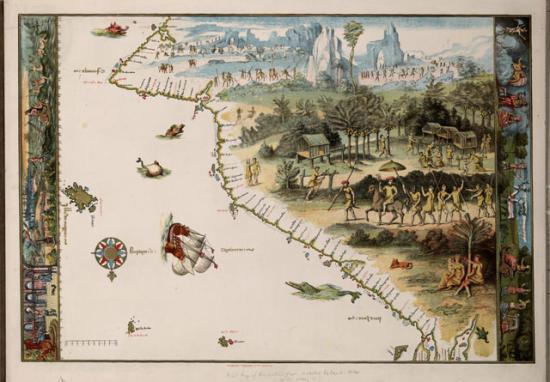 Theory: French maps made in Dieppe in the 16th Century and based on Portuguese sea charts show a continent called Jave la Grande. When "realigned" to allow for errors in mapping longitude at the time, the maps supposedly resemble the coast of Australia.

Weakness: The Dieppe maps show no "discoverer" of the landmass and there is no surviving record of any Portuguese voyage to Australia before 1606 or any Portuguese map showing any trace of land in that area. (Mr Trickett says such records were likely kept in waterfront buildings destroyed in an earthquake and tsunami that hit Lisbon in 1755. He also says the Portuguese did not publicise their discovery because they did not want rival naval power Spain to know.)

Critics also question the methodology used to "realign" the maps and say the features identify Indonesia's coastline, not Australia's. Others say the Dieppe maps should be seen as propaganda for French geographic knowledge and territorial claims at the time.

A close up of a design on one of the guns. (Western Australian Museum)

Theory: Two bronze guns were found on a small island off the WA coast in 1916, said to be left there by Portuguese seafarers. The decoration on one of the guns, pictured, has been compared to the Portuguese "rose and crown" insignia.

Weakness: The Western Australian Museum analysed the guns in 2007 and determined they were based on a European design but manufactured in Indonesia in the 18th Century.

Theory: The remains of one of de Mendoca's caravels purportedly were discovered in 1836 by shipwrecked whalers. Between then and 1880, 40 different people said they saw an "ancient" or "Spanish" wreck which may now be buried beneath the sand somewhere west of Warrnambool in southwest Victoria. Descriptions of the dark wood timber and panels match that of a Portuguese caravel.

Weakness: Despite extensive searches, the fabled vessel has never been found. Historians have also questioned accounts of the shipwreck, which have now entered folklore.

Theory: Stone ruins at Bittangabee Bay near Eden on the NSW south coast supposedly were once a stone blockhouse and defensive wall built by the crew of a Portuguese caravel while wintering during a voyage down Australia's east coast. One historian identified the date "15?4" carved into the stone.

Weakness: In 1987 an article published in an archaeology journal identified the ruins as having been built as a store house by two early European inhabitants in 1844. Other visitors have been unable to find the 15?4 date and some suggest it may be just random pick marks in the stonework.