Archaeologists from the Cluster of Excellence make an unusually large find in Turkey – surprisingly vivid insights into the piety of the time.

Classical scholars from the Cluster of Excellence “Religion and Politics” made an unusually large find of seals in an ancient sanctuary in Turkey. They discovered more than 600 stamp seals and cylinder seals at the sacred site of the storm and weather god Jupiter Dolichenus, 100 of which in the current year alone. “Such large amounts of seal consecrations are unheard-of in any comparable sanctuary”, said excavation director Prof. Dr. Engelbert Winter and archaeologist Dr. Michael Blömer at the end of the excavation season. In this respect, the finding of numerous pieces from the 7th to the 4th centuries B.C. close to the ancient city of Doliche is unparalleled. 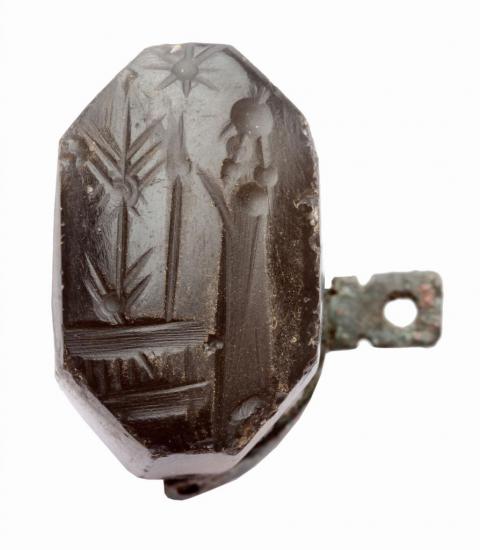 “The amazingly large number proves how important seals and amulets were for the worshipping of the god to whom they were consecrated as votive offerings”, according to Classical scholar Prof. Winter. Many pieces show scenes of adoration. “Thus, they provide a surprisingly vivid and detailed insight into the faith of the time.” The stamp seals and cylinder seals as well as scarabs, made of glass, stone and quartz ceramics, were mostly crafted in a high-quality manner. Following the restoration work, the finds were handed over to the relevant museum in Gaziantep in Turkey. 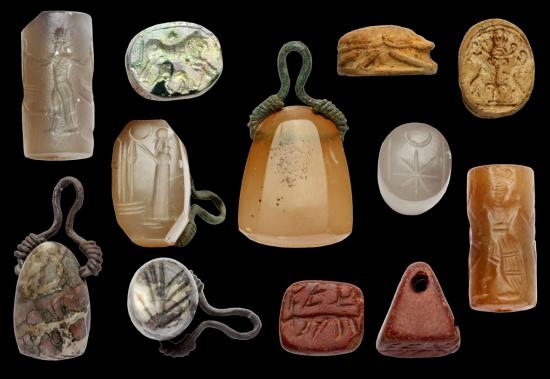 Selection of seals found during the excavations in 2013 Foto: Forschungsstelle Asia Minor

Different themes can be found on the seals and amulets: the spectrum ranges from geometric ornaments and astral symbols to elaborate depictions of animals and people. This includes, for example, praying men in front of divine symbols. Another popular theme was a royal hero fighting animals and hybrid creatures. “Even those images that do not depict a deity express strong personal piety: with their seals, people consecrated an object to their god which was closely associated with their own identity”, said Blömer. People wore the amulets found with the seals in everyday life. “Strung on chains, they were supposed to fend off bad luck”, explained the archaeologist.

From the Iron Age until the Roman Empire

Up to now, the researchers were able to identify late Babylonian, local Syrian Achaemenid and Levantine seals. “The large find provides new impetus for research to answer unsolved questions of cult practices, cult continuity and cult extension – above all, these are important for the understanding of the early history of the sanctuary in the 1st millennium B.C., which had been unknown until recently”, according to Prof. Winter. Later, in the 2nd century A.D., Jupiter Dolichenus turned into one of the most important deities of the Roman Empire.

During this year’s excavations at the Turkish mountain Dülük Baba Tepesi, Prof. Winter’s team worked in an area of over 500 square metres. “The results are already extending our knowledge of all periods in this holy place’s long history. It covers the time span from the early place of worship of the Iron Age and the sacred site of the Roman era, famous throughout the empire, to the long phase of utilisation as a Christian monastery, which existed until well into the time of the crusaders”, explained Prof. Winter. The two-month excavation campaign has been particularly fruitful as regards the sanctuary’s early years. “At the peak’s central plateau, in addition to a well-preserved section of the thick Iron Age enclosing wall, parts of structures from the 7th to 4th centuries before Christ were excavated within the enclosure for the first time.” Due to new finds such as columns or capitals dating back to the Roman era, the main temple of the empire’s sanctuary can now be reconstructed. According to the scholars, the location of the temple, on the other hand, is still posing riddles.

Work at the archaeological park is proceeding

After this year’s excavation season had ended, work at the touristic development continued. “We were able to complete a visitors’ path leading to central areas within the excavation site, with signposts in three languages.” Furthermore, according to the researchers, numerous protective and precautionary measures are required in order to secure the remains of the sanctuary permanently. An initial large protective shelter has already been erected this year.

In 2012, the research team announced an archaeological park which is to make the outstanding temple complex and the local medieval monastery ruins of Mar Solomon accessible to the public at large. For that purpose, the ruins had already been preserved and encased with a special fleece material, according to the scholars. The implementation of the complex and costly protection measures was made possible by cooperation with the Turkish University of Gaziantep, which provided about 200,000 Euros for three years, as Prof. Winter said. As regards the digital documentation of the area, the team was supported by the Institute for Geoinformatics of the University of Münster, where a quadrocopter – a remotely piloted vehicle – with a 3-D camera was developed.

Supported by the German Research Foundation (Deutsche Forschungsgesellschaft, DFG), the University of Münster’s Asia Minor Research Centre has been doing excavation work at the main sanctuary of Jupiter Dolichenus under the direction of Prof. Winter since 2001. The international group consisting of archaeologists, historians, architects, conservators, archaeozoologists, geoinformation scientists and excavation workers uncovered foundations of the archaic and the Roman sanctuary, as well as of the medieval monastery of Mar Solomon, which had previously only been known from written sources. The Cluster of Excellence’s project B2-20, “Media Representation and Religious ‘Market’: Syriac Cults in the Western Imperium Romanum”, is interlinked with the excavations.