Duizi (Chine) : occupation of the site from the Neolithic period to northern and southern Han Dynasties

The Current Discovery of the Site of Duizi, Yunnan Province

On the basis of the evidence provided by Yunnan provincial Institute of Archaeology, archaeologists explored the site of Duizi in Yongsheng county of Yunnan province. The excavation that was finished has recently yielded 18 houses, 140 tombs, and a great amount of artifacts. The so-called Duizi site is located at Taoyuan village, Yongsheng county, the city of Lijiang of Yunnan province. This Site is situated on a terrace on the left bank of the Jinsha River, where it raises a height of 1200 meters above sea level, approximately. This site was first recovered in 1973. During the second time of general, nation-scaled investigations of cultural relics, the site was confirmed again and re-excavated. Especially, because of a flooding area of the hydroelectric Power Station in the neighborhood of the site, Yunnan provincial Institute of Archaeology conducted rescued excavations in 2010 for a half year. 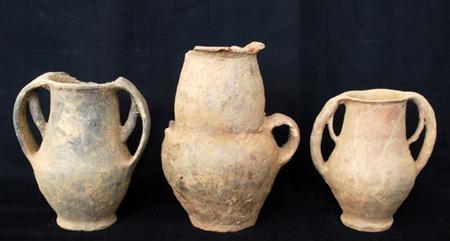 An area of 10,000 square meters was excavated for this time, which reflected houses, tombs and pits. Of the tombs (140 in total), there appears to be four categories, including pit tombs, stone-lined tombs, stone-constructed tombs and urn tombs. Among them, pit tombs were commonly rectangular-shaped, oriented from south to north. The ceramic assemblages included in tombs were jars, pots and bowls, etc. While the stone-lined and stone-constructed tombs, which were surrounded by natural slabs and pieces of stone, may provide evidence for the practice of secondary burial. Urn tombs usually buried children, which were in oval shape with ceramic pot as burial appliances, and oriented from east to west, in the same direction as that of stone-lined and stone-constructed tombs.

One of the house foundations that were found supplied evidence of the construction of pile-dwelling, since there were a series of postholes arranged regularly. Other 17 houses were semi-subterranean building in square shape with round corner, remaining a height of 10 to 30 centimeters. Lays of burned earth were found in the walls and floors within the houses at a depth of 3 centimeters, approximately. Such kind of walls and floors has been analyzed as moistureproof function. Meanwhile, more than 30 pits were discovered, which appear commonly to have been round-shaped with their sections of pit-shape. A few of pits appeared deposits of burned earth.

Meanwhile, there were thousands of artifacts that had been labeled. Their categories were considerably diverse, including a wide range of materials, such as ceramic, stone, bone, bronze, iron, teeth and shell. Normally, the teeth and shell were manipulated for the use of ornaments, of which the amount was less than that of the others. The ceramics could be classified in the form of jars, bowls, bottles, high-standed vessels, pans, and spindle-wheels. The stone-tool assemblages include axes, adzes, awls, knives, battle-axes, needles, arrowheads, bi disk, rings, bracelets, pebble and grinding-stones. Bone tools include awls, hairpins, rings and earrings Bronze tools include knives, swords, spears, arrowheads, pins, fish-hoops, bells and bracelets, etc.

The occupation of the site of Duizi appears to have been from the Neolithic period to northern and southern Han Dynasties. The ancient cultural strata on the site appear to be complex but clear; as a result, they have been properly analyzed. The analysis of its strata may provide the value for the archaeological classification in the near future, and for the understanding of the activitivies of the ancient people in the middle region of Jinsha River. Meanwhile, the data could be taken as significant evidence of the reconstruction of the earlier archaeological culture in the region of Jinsha River.     (Translator: Sang Li)