Dublin 1014: built on water and commerce

The Vikings were adept at choosing sites for their towns, and with its confluence of rivers, strategic political position and fertile hinterland, Dublin offered huge potential 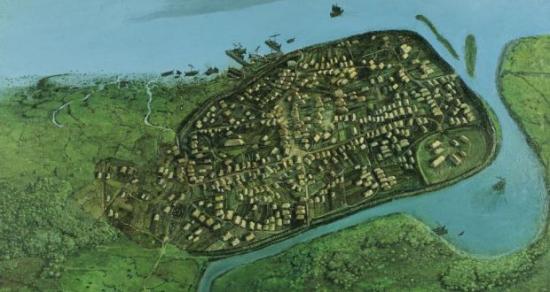 1014: Dublin 1,000 years ago, based on research by Dr Patrick Wallace. Illustration: Simon Dick/National Museum of Ireland

Can we envision Dublin before a city stood by the Liffey? What sort of environment did Dubliners of 1014 live in? We can make some reasonable guesses, partly with the help of archaeology and geology.

First, Dublin Bay in its natural state came in as far as Grattan Bridge, which joins Capel Street and Parliament Street; everything to the east is built on infill.

Second, the River Liffey was about 300m wide at high tide and therefore fordable only at low tide. It was also subject to flash floods and potentially dangerous.

Third, its tributary the Poddle helped to define a defensible site at the end of the east-west ridge on the south bank of the main river. A tidal pool in the Poddle provided a perfect location for a Viking fleet.

Vikings became adept at choosing locations for sea- and land-based communications. They also favoured sites on political boundaries, to exploit local tensions and tap into existing exchange mechanisms. Dublin, on the northern boundary of the province of Leinster, had lots of potential. The fringes of Dublin Bay may have been unprepossessing slobland, but that did not matter to skilled and experienced sailors. 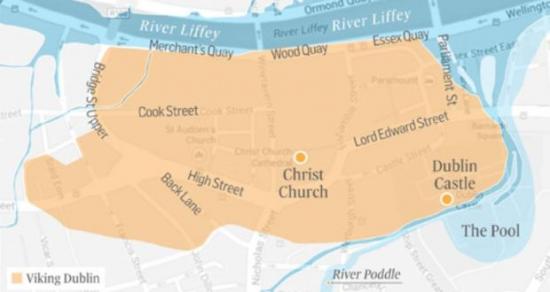 2014: an idea of how Viking Dublin (shaded) would sit in the modern city. Map: Howard Clarke/The Irish Times

The hinterland, too, was full of agrarian resources. It was long settled by the native Irish, who practised mixed farming. One element must have been barley, for the local southside district of Cualu – including some of north Wicklow – was famous for its ale.

The archaeology of Viking Dublin has demonstrated, among other things, that ash trees were being coppiced to provide posts for houses and fences.

Dublin was already a place where one could hope to live well. It was a centre of communications by land and sea. Four long-distance routes of prehistoric origin converged in the bay, facilitating travel to and from Britain. Viking Dublin was by far the most important Scandinavian settlement in Ireland. It is no exaggeration to suggest that the Battle of Clontarf was a battle for Dublin.

According to a later literary account with a strong Munster bias, Sitric Silkbeard, the king of Dublin, did not fight on that fateful day. Instead he watched the proceedings from the “battlements” of the town. 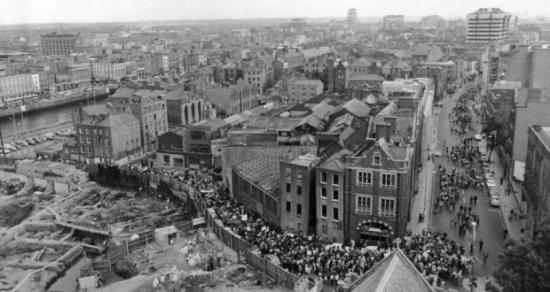 Protests: marchers demonstrate against the Wood Quay redevelopment during the excavations of the 1970s. Photograph courtesy of Thaddeus Breen/History Ireland magazine

What was the nature of Dublin’s defences? Extensive archaeological investigations, at Wood Quay and elsewhere, mean we have a reasonable idea. What was labelled “Bank 3” at Wood Quay consisted of an earthen embankment with an external ditch about two metres wide. Presumably, it was surmounted by a wooden palisade.

Dublin’s defences had been strong enough to prevent a Munster army capturing the town in the autumn of 1013. Very possibly these defences had been rebuilt after the burning of Dublin by an earlier army under Brian’s command, following his decisive victory over the Dubliners at the Battle of Gleann Máma, fought southwest of Dublin on December 30th, 999.