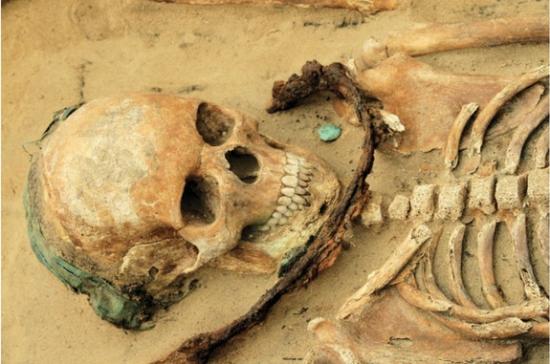 This teenage girl was buried in a Polish cemetery with a sickle over her neck, possibly to ward off demons. She was also buried with a copper headband and a copper coin, archaeologists found. Polcyn et al. Antiquity 2015, DOI: 10.15184/aqy.2015.129

How do you keep a demon from disturbing the living? A blade to the throat should do the trick.

A few skeletons unearthed in a 400-year-old Polish cemetery have been discovered with sickles placed around their necks. Archaeologists believe this strange burial practice is evidence of a belief in magic and a fear of demons.

The sickle burials were found at Drawsko cemetery, a site in northeastern Poland that dates from the 17th to the 18th centuries. Archaeologists, including Marek Polcyn, a visiting scholar at Lakehead University in Canada, have excavated more than 250 graves there since 2008.

Among those graves were four skeletons with sickles placed at their throats, and a fifth skeleton with a sickle placed over its hips. Previously, these burials had been described as "vampire" burials, with the sickles interpreted as a way to prevent the dead from reanimating and terrorizing the living. But in a new study detailed in the journal Antiquity, Polcyn and co-author Elzbieta Gajda, of the Muzeum Ziemi Czarnkowskiej, now reject that characterization. ("We deliberately dismiss the interpretation of a revenant (i.e. vampire)," isn't something you read in an academic paper every day.) [See Photos of the Sickle Burials at Drawsko Cemetery]

Instead, the archaeologists prefer to use the blanket term "anti-demonic" to talk about these burials, partly because vampires weren't the only kinds of evil incarnations of the dead, according to traditional folk beliefs in the region. But also, the sickle graves were afforded funerary privileges that weren't usually extended to "vampires" buried elsewhere: They were given Christian burials in sacred ground alongside other members of the community, and their corpses do not appear to have been desecrated or mutilated.

In another sign that the people buried with sickles probably were not outsiders, scientists who studied chemical signatures locked in the teeth of these corpses found that all five individuals were locals. (They published those results in a paper in PLOS ONE last year.)

"The magical and ritual meaning of this gesture seems beyond doubt," Polcyn and Gajda wrote, adding, however, that the sickle might have had more than one ritualistic meaning. The tool may have been intended to keep the dead in their graves under the threat of cutting their throat, but it also might have been used to prevent evil forces from tormenting their souls. What's more, the use of a tool made of iron, which had to undergo a transformation in fire, could symbolize the passage from life to death, the authors wrote.

Even though Christianity was the dominant religion in Poland at the time this cemetery was used, traditions from old Slavic pagan faith and folk belief systems still existed, including a belief in demons. Besides the sickles, there is not much that makes these graves unique, so the scientists aren't sure exactly what about these people made them demonic. They may have been thought to have supernatural powers in life, or they might have had physical characteristics considered suspicious (which might have included "an exceptionally hairy body," a unibrow, a large head and a red complexion, the authors said, citing traditional Polish folklore).

These people also might have died in a traumatic fashion, without anytime for the appropriate rites and rituals to make for a smooth spiritual transition into death — a concept some archaeologists call a "bad death." While some of the people buried with sickles may have simply died of old age, one of them, a girl, died as a teenager. The authors speculated that she might have met a violent and untimely end, perhaps through drowning, suicide or murder. Unfortunately for archaeologists, however, this death didn't leave its mark on the girl's bones.

Polcyn and Gajda wrote that they hope further scientific tests on the corpses, such as biomolecular analyses, will help them understand more specifically what led the dead in Drawsko to be buried with sickles.