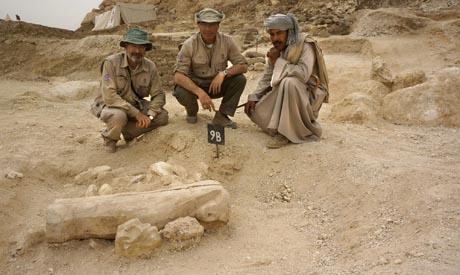 Although the Egyptian sarcophagus does not have any engravings, decoration, or mummy inside, early studies carried out in situ by Jose Galàn, head of the archaeological mission, revealed that it belongs to a yet unidentified child who died during the 17th Dynasty.

A collection of wooden pots and pans was also unearthed beside the sarcophagus in the Draa Abul Naga area in Luxor's west bank, along with a collection of Ushabti figurines (statuettes) carved in wood and wrapped in linen . 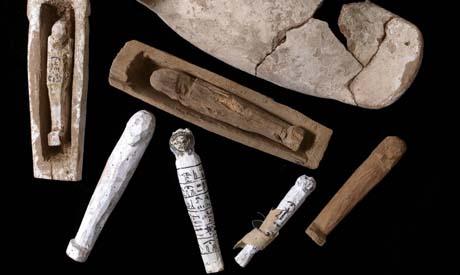 Mansour Boreik, supervisor of Luxor antiquities, told Ahram Online that the Ushabti figurines depict the similar facial features of the well-known priest Ahmosa saya Ir, who played a major role in the royal palace during the 18th Dynasty.

Djehuty would appear to have participated in the construction and decoration of most of Hatshepsut's monumental constructions in Thebes as well as registering all the exotic products, including minerals and spices, brought from the land of Punt, as shown on his tomb walls. "He was such an important official that he is even represented carrying out such activities on one of the walls of the mortuary temple of Hatshepsut at Deir Al-Bahari," Galàn said.

Minister of State for Antiquities Mohamed Ibrahim said that Djehuty's tomb was discovered in 2003. The discovery amazed Egyptologists and historians because of its distinguished and uncommon architectural design and decoration as well as the artefacts found within its corridors. Since 2003 until now, objects from different dynasties were piled in the tomb to form a haphazard treasury. Among the artefacts unearthed are eight mummies of falcons and a demotic graffito relating to them. The drawing located on one of the tomb walls suggests the tomb was reused in the Graeco- Roman era.

A 70cm-deep pit containing 42 clay vases and 42 flower bouquets, used during Djehuty's funerary ceremony, along with a Middle Kingdom coffin of a middle class woman buried only with a faience necklace were also found.

While work was in progress around Djehuty's tomb, another tomb dating from the beginning of the 18th Dynasty was unearthed. It belongs to a man named Hery who died in the reign of Amenhotep I, and was the supervisor of the Treasury of Queen Iya-Hutep, the mother of Ahmose I.