Down syndrome theory on Hobbit species doesn't hold to scrutiny 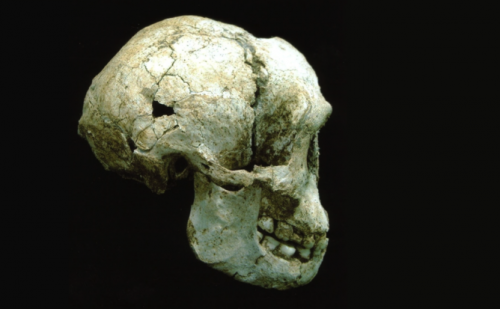 Claims that bones found in an Indonesian cave are not the remains of a new species of extinct hominin but more likely modern humans suffering from a chromosomal disorder have been disputed by a new look at the evidence.

Last year Prof Maciej Henneberg, of the University of Adelaide, and his colleagues sparked intense debate among human evolution researchers when they published a pair of papers (here and here) in the Proceedings of the National Academy of Sciences.

Henneberg and colleagues argued that the so-called Hobbits – known by their scientific name Homo floresiensis – were not a new species of early hominin but just small-bodied modern humans with Down syndrome.

It's now more than ten years since a joint Indonesian-Australian team led by the late Prof Michael Morwood announced the discovery of the famous Hobbit fossils from the site of Liang Bua on the island of Flores, Indonesia.

Opinions about the significance of the fossils for our understanding of human evolution are generally accepted by the majority of the scientific community, although some researchers argue that the Hobbits are pathological modern humans.

But the Down syndrome argument does not hold on the basis of the evidence from the two lower jaws (mandibles) from the site, which belong to individuals known as LB1 and LB6, as we argue in a reply published this month, also in the Proceedings of the National Academy of Sciences USA.

Here we summarise the main points we make in our reply.

No support for a key claim

The LB1 and LB6 mandibles are crucial to Henneberg and colleagues' argument. Both specimens have a "negative chin," which is where the outer surface of the bone at the front of the mandible, below the incisors, recedes.

The researchers who first described the Hobbit fossils argued that this trait sets the LB1 and LB6 mandibles apart from modern humans, who have a protruding chin, and aligns them with the early hominins, who have negative chins (as shown in the image below of the African Homo ergaster fossil OH 22 below).

Henneberg and colleagues reject this claim. They contend that negative chins are often found among the indigenous people of Australia and Melanesia. Consequently, they suggest, the occurrence of negative chins on LB1 and LB6 does not stop them from being modern humans. 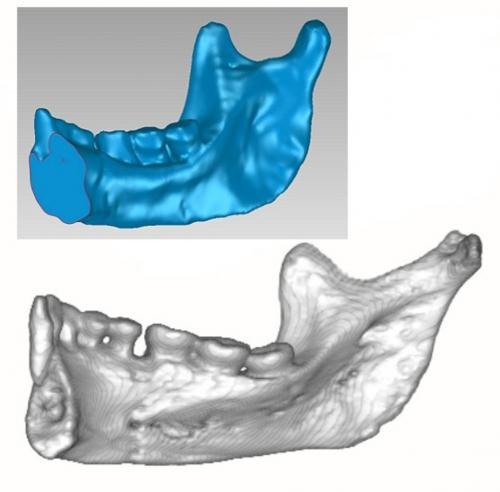 The mandible of LB1 (in blue) compared to that of an indigenous person from the archaeological site of Roonka, Australia. Credit: Prof Mike Morwood; CT scan of Roonka 45 generated by Assoc Prof Arthur Durband, Author provided

Henneberg and colleagues offer three pieces of evidence in support of their assertion that negative chins are commonplace among the indigenous people of Australia and Melanesia: two previous studies and a photograph (see figure S3 in the Supporting Information) of a mandible from an Australian archaeological site called Roonka.

Unfortunately, none of these pieces of evidence withstands scrutiny. One of the studies has not been published, which means that it has not been peer-reviewed and therefore does not meet the minimum standard of scientific quality.

The other study has been published in a respectable peer-reviewed scientific journal but has since been severely criticised.

The chin is not the only feature of the LB1 and LB6 mandibles that does not support Henneberg and colleagues' argument.

A study that was published several years ago identified a number of other traits that LB1 and LB6 share with early hominins but not with modern humans.

One of these traits can be seen in both the photograph of the OH 22 mandible and the CT scan of the LB1 mandible. On the inside of the front of the mandible there is a bulge. Such "buttresses" are common in early hominin mandibles but are not found in modern human jaws. 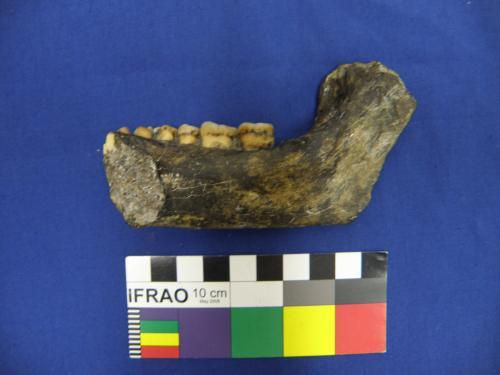 A second trait that distinguishes the LB1 and LB6 mandibles from those of modern humans is the presence of distinct gap between the end of the tooth row and the rear section of the jaw.

A third trait that links LB1 and LB6 with the early hominins rather than modern humans is the form of their tooth roots.

Henneberg and colleagues ignored these traits, but their presence in LB1 and LB6 provides strong support for the hypothesis that the Liang Bua fossils are the remains of early hominins and not those of modern humans.

Taking it on the chin

The Down syndrome hypothesis is the latest in a long line of attempts to explain the features of the Liang Bua hominin fossils as pathologies.

It should be the last, we think.

The mandibular evidence disproves the idea that LB1 and LB6 are modern humans, and there are a number of other lines of evidence that do so too, as the work of Prof William Jungers, Prof Peter Brown, and several other colleagues has demonstrated.

It is time for the field to move on. The Hobbits are a new species of early hominins not modern humans with Down syndrome or indeed any other pathological condition.