Archaeologists have discovered one of the victims of a suspected mass Viking burial pit found in Dorset had grooves filed into his two front teeth. 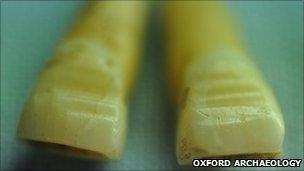 Experts believe a collection of bones and decapitated heads, unearthed during the creation of the Weymouth Relief Road, belong to young Viking warriors.

During analysis, a pair of front teeth was found to have distinct incisions.

Archaeologists think it may have been designed to frighten opponents or show status as a great fighter.

Oxford Archaeology project manager David Score said: "It's difficult to say how painful the process of filing teeth may have been, but it wouldn't have been a pleasant experience.

"The incisions have been very carefully made and it is most likely that they were filed by a skilled craftsman.

"The purpose behind filed teeth remains unclear but, as we know these men were warriors, it may have been to frighten opponents in battle or to show their status as a great fighter." 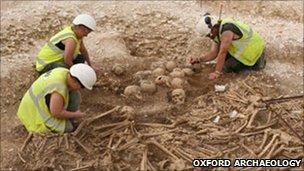 Many of the executed men suffered multiple wounds inflicted by a sharp blade, including one skeleton with six cut marks to the back of the neck.

Mr Wallis said those dates fell within the period of Viking raids on the Anglo Saxons in the UK, and isotope analysis of teeth found in a severed jaw suggests they were from the Nordic countries.

He said: "It's great that the burial pit on Ridgeway is still surprising us and teaching us more about who these men may have been and what they may have been like.

"It is very rare that this kind of deliberate dental modification is found in European remains, although it is often found in cultures from around the world, so that it was found in an excavation in Dorset is fantastic."