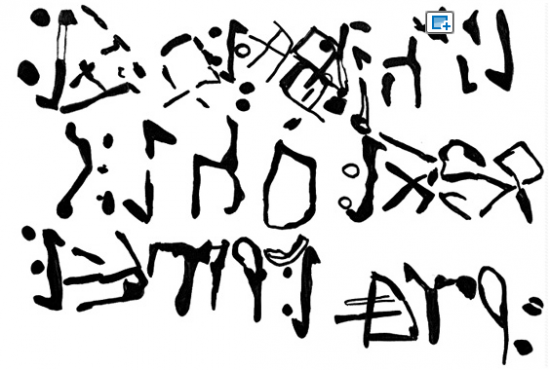 Ancient Turkic inscriptions discovered in Mongolia, which should be read from right to left (Provided by Takashi Osawa)

Two massive slabs of stone inscribed in ancient Turkic script have been found on the steppes of eastern Mongolia, the first such discovery in over a century, a Japanese researcher said July 16.

He said the finds may offer invaluable clues to the political systems and institutions of the Gokturk people, who faced the Sui and Tang dynasties in China in times of peace and war as they reigned over the steppes of Central Asia.

Osawa said he and researchers from the Institute of Archaeology of the Mongolian Academy of Sciences discovered remnants of two giant epigraphs in May at an archaeological site called Dongoin shiree. It is near Mount Delgerkhaan, 400 kilometers southeast of Ulan Bator, the Mongolian capital.

Combined, they are inscribed with 2,832 symbols, in 20 lines of ancient Turkic script.

Osawa, who deciphered the writing, said it describes the lamentation of people who have to leave their beloved families and homeland behind when they die.

"Oh, my home!" reads one inscription. Another reads: "Oh, my land!"

Signs engraved in the epigraphs indicate the artifacts likely represent epitaphs dedicated to members of the Ashina tribe, the reigning family of the Second Turkic Empire (682-744).

The Gokturks are the oldest nomadic people in Central Asia that left records of their own language in their own writing system.

The discovery is significant as it is the first of its kind since the three most renowned ancient Turkic inscriptions (Bilge Kaghan, Kol Tigin and Tonyukuk) were discovered in central Mongolia about 120 years ago, experts said.

"Other parts that remain buried in the ground may offer a record of the lives of the individuals commemorated," Osawa said.

"Research on ancient Turkic script has centered on the re-reading of known inscriptions after a Danish linguist deciphered the writing in the late 19th century," said Takao Moriyasu, a professor of Central Asian history at Kinki University. "The latest finds could help unravel new facts."

The history of the Gokturk state started when Yili Kaghan founded the First Turkic Empire in 552.

Political maneuvering by the Sui Dynasty of China split the Gokturk nation into an eastern and a western part, with the East Turkic Empire succumbing to Tang China's rule in 630. The Gokturks regained independence from Tang China to found the Second Turkic Empire in 682, only to be brought down by the Uighurs in 744.