Carbon-dating has shown that the rudimentary snow shoe, made of birch wood and twine, was made between 3,800 and 3,700 BC

Scientists in Italy’s Dolomite mountains have unveiled what they believe to be the world’s oldest snowshoe.

Carbon-dating has shown that the rudimentary snow shoe, made of birch wood and twine, was made in the late Neolithic age, between 3,800 and 3,700 BC.

“It is the oldest snowshoe in the world so far discovered, dating to around 5,800 years ago,” scientists said in a statement.

It was discovered by chance at an altitude of 3,134 metres (10,280ft) on the Gurgler Eisjoch glacier, close to Italy’s border with Austria.

The ice and freezing temperatures of the glacier had provided “ideal conditions for the preservation of organic material,” the researchers said. 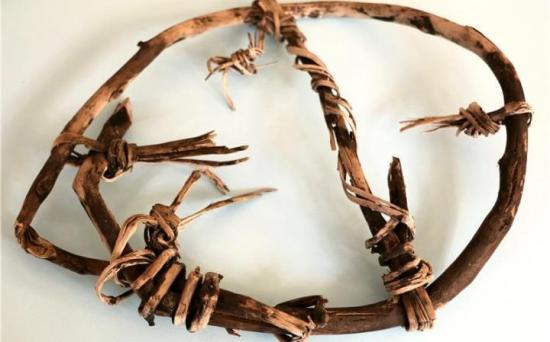 The snowshoe was discovered by chance on the Gurgler Eisjoch glacier, close to Italy’s border with Austria

The shoe, which consists of an oval-shaped frame with strands of twine tied across it, was found by Simone Bartolini, a cartographer from Italy’s Military Geographical Institute, who was mapping the border with Austria.

He came across it in 2003 but for the next 12 years kept it in his office in Florence as a curiosity. “At first I thought it was maybe 100 years old and was a snow shoe that belonged to a farmer who lost it while driving cattle. I kept it in my office as a keepsake," Dr Bartolini said at a press conference on Monday in Bolzano, the capital of the autonomous, Germany-speaking province of South Tyrol.

It was only last year that it dawned on him that it could be much older and more significant. He gave it to archaeologists to study.

The discovery was made close to where the frozen, mummified remains of a Neolithic hunter were found by two German hikers 25 years ago.

Since nicknamed Oetzi after a local mountain range, the mummified corpse has revealed a wealth of information on what people of the period wore and ate, how they hunted and armed themselves and how they travelled.

He is believed to have died 5,300 years ago as a result of a violent attack – he was shot by an arrow and then possibly hit with a blunt instrument such as a club. Scientists at the press conference said the discovery of the snowshoe was “exceptional”.

"The shoe is evidence that people in the Neolithic period were living in the Alps area and had equipped themselves accordingly," said Dr Catrin Marzoli, the director of the province’s cultural heritage department.

It was unclear why people were travelling through such an inhospitable region, she said.  They may have been hunting animals, fleeing enemies from a rival tribe, or visiting pagan sites of worship. The shoe will be put on display at the South Tyrol Museum of Archaeology in Bolzano.

Global warming and the gradual retreat of glaciers has helped unearth new finds, said Valentino Pagani, the museum’s director of archaeology. “It is important that we make these discoveries - and through them the life stories of the South Tyrol people - available to as many people as possible," he said.

Oetzi’s remarkably-preserved body is on display in a cold storage chamber at the museum. Research has revealed that he was in his forties, his body was decorated with tattoos, and one of his last meals was ibex meat.  He probably died of blood loss, having been struck in the shoulder by an arrow.  He was suffering from arthritis and possibly Lyme disease when he died.